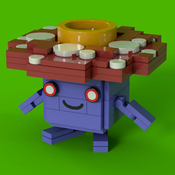 By AndrewC456
67 comments
A small-scale recreation of the iconic "Lover House" from Taylor Swift's Lover Music Video that was released in 2019.
The Lover House is loved by fans for its colour-coded rooms which represent Taylor Swift's albums' colour themes.
Following the release of her 10th studio album and whilst in the process of re-recording her old albums, Taylor Swift announced a tour that will be themed around her 10 different "eras" for her 10 studio albums. Following this, the Lover House had come back around in Taylor's promotion, 3 years after it appeared in the Lover music video, to promote merchandise for all 10 of her albums to allow fans to get merchandise for their favorite Taylor Swift albums, further solidifying the Lover House's significance outside the music video as a symbol for her collection of albums & eras.
At a total of 1653 pieces, the set is designed to be as small to keep the piece count and cost low while also keeping as much detail of each room in the set. Each room was designed in a way that the house can be built modularly having each room being a separate smaller build that can easily be assembled into the full house or displayed separately. This also allows for builders to build alongside friends or family, each picking their favourite rooms to build. I wanted to allow for a fun and simple building process and cheap cost to make the set to as many as possible, for Taylor Swift fans who may not have ever built a set before or can not afford a large set.
The set also includes a Taylor Swift Minifigure wearing a pink outfit as she does throughout many parts of the Lover Music Video.
This set is a celebration of Taylor Swift's 10 albums and the accomplishments she has achieved throughout her career.