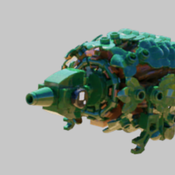 First of all, before you read, I would just like to thank you for clicking on my project!

Everyone at one point has wanted to pilot a mech suit. Admit it. I want to achive just that with this mech suit. I built this with one of nature's strongest creatures, the gorilla, in mind. The result was a three-time revised and posable suit. It features a minifigure, a mech, and a display stand. The mech itself has two posable hydraulic arms that are attached to steel side pannels. On the back is a titan-class jet engine capable of lifting 2 tons of solid metal off the ground. Next, to support it's massive frame are two multi piston legs to help it lope around. The stand itself is about 16x16 studs big with an industrial theme and is usefull for displaying many creations. The minifigure is a tech guru who although may still be in school, he has created this for the sheer fun of it and to help the world around him, just like me. I created this for the sole purpose of fun and do not expect it to get far. However, I would love it if it was supported. Thank you to all who do support it! See you later!