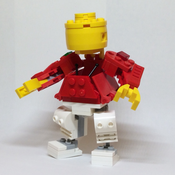 Elsewhere, a dark silhouette speaks to his fellow companions in a garbled language: "they have found evidence, gather arms!"

Don't forget to check for updates!