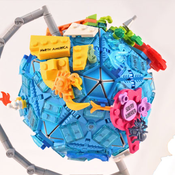 Build LEGO Earth, a foldable map that transforms into a globe! Dabble in cartography as you assemble the seven continents in bright, coordinated colors.

Unique elements such as the Statue of Liberty in New York harbor, the Eiffel Tower in France, and a red snake posing as the Great Wall of China add character on the continental plates. Enjoy seeing your favorite food elements posing as islands in southeast Asia, but beware of the erupting Hawaiian volcanoes in the Pacific. Model builders will be taken by the ocean currents and accurate portrayal of real-world geography.

Based on the foldable dymaxion map projection designed by two architects, R. Buckminster Fuller and Shoji Sadao, the map emphasizes the land bridges that connect the continents rather than the oceans that separate us. However, it is most loved for its artistically unique shape and its ability to transform into a globe.

Consult the globe’s frame to learn your latitude and enjoy the special tribute on the globe’s base to R. Buckminister Fuller, who also designed Spaceship Earth in Disney World’s Epcot.

Total part count including stand is ~785 pieces. Check back in to see the traditional mercator map alternative build.

Maps have fascinated me since I was a child, drawing my first maps at only a few years old. Now a land surveyor and mapmaker, I have long wanted a LEGO globe and map for display.

LEGO, I am open to modifications of the design, but have applied cartographic principles to ensure its accuracy and visual appeal. A few elements such as the white teeth in Asia posing as the Himalayas could benefit from a color change, and a tan boomerang element would quite appropriately resemble New Guinea in the south Pacific.

Thank you for supporting and sharing this idea.