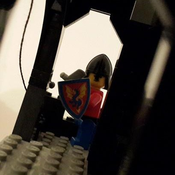 By hashem1983
27 comments
The Titanic Grand staircase is now back with a slightly updated version, as I have decreased the height 1 brick for each deck, new pillars design and an update on the staircase itself.
Ever since I saw James Cameron's Titanic, in the late 90s I became obsessed with it and as a subject in general, I even imagined how the Grand Staircase could be built in LEGO.
It took me years to think of building the set on LEGO Digital Designer and a total of over a month to achieve it, this is how I am obsessed with it, built with love and passion.
During the build, I have tried to take every possible detail that was on the ship and apply it as a LEGO build even though there were some impossible to achieve.
Although the build was on LEGO Digital Designer, I have rendered the models on Studio 2.0, and Photoshopped the arms because when I imported the model to Studio the arms positions were dropped leaving the claw hands in its place.
I believe this could be a very good set because it's an interesting tribute to all fans of Titanic and not only the film, I added Jack and Rose as a symbol to the ship and because of this motion picture I also became interested in the subject itself.
Per the LEGO Digital Designer, this build used a total of 2848 pieces including the brick separator, that’s 484 more bricks than the previous version.