Specter Knight and the Enchantress Brickheadz 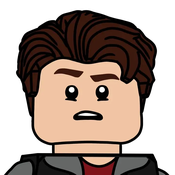 By Hungry Toast
13 comments
These brickheadz are based on two of the characters from the game Shovel Knight. Shovel Knight is a fantastic indie platformer with tons of original characters. Honestly, I could have made dozens of Brickheadz based off of Shovel Knight. I decided to make more because it's fun. (I have another project with Black Knight and Shovel Knight if you wanna check that out) The two characters I chose this time were Specter Knight and The Enchantress, the final boss you face in Shovel Knight: Shovel of Hope. I had to thicken up their arms as they didn't work with the belt any other way.
I built this because I've recently gotten into making Brickheadz. I've also been replaying Shovel Knight: Shovel of Hope, in co-op with my friend. Playing through the game again re-sparked my love for this game.
I think that this would make a great set as it would get us more of both video game and indie sets by LEGO. I also think that Shovel Knight would be a great title to be the second video game IP right after LEGO Mario (at least I think). The game has fantastic characters, great environments, and vibrant color schemes, it's practically begging to become a LEGO set in one way or another.