Multi Season Train Station: A Station Set That Fits In Every Train Layout 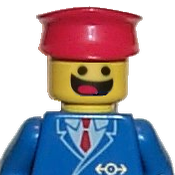 Multi-season train station: a station that you can use in your winter village but also in your other train layouts!

With the new Winter Train set being released, I wanted to build a train station for my winter village. But I thought it was a pity that I could only use the station in my winter village, given its winterly appearance. So I came up with the idea of a multi-season train station. This set is a 2-in-1 set: a winter design as primary model and a non-winter design as a secondary model.

Outside the building
The building is built in dark bluish grey with light bluish grey and dark red accents, the roof is dark red. The chimney is light bluish grey and is hollow all the way down. Because of this, you can see the fire light from the top due to the use of a light brick. The windows are reddish brown and white, with black blinds. The platform is dark tan. Adjacent to the right side of the station is a wooden (reddish brown) shed which is used for the storage of luggage. The shed has a black roof. The front of the station has double doors for access to the station building and a door that gives access to the luggage shed. The backside of the station has also a door.

The platform contains a waiting bench, two antique double lamp posts, a garbage bin, a train schedule board and close to the luggage shed some wooden logs for the fireplace inside and a salt container which the station manager uses to keep the platform free of snow. Five segments of train track are included in the set.

Inside the building
The first floor of the building has a waiting area with a waiting bench, a fire place and a Christmas tree (winter model). The fire place lights up by means of a light brick which is accessible from the outside of the building (behind the hatches in the base of the chimney). The station’s manager office contains a chair, window, telephone, register and a train schedule board on the wall. The floor of the first floor is made out of dark blue and dark bluish grey tiles. The luggage shed is accessible from the station’s manager office and contains shelves with a movable ladder. The floor of the shed is dark blue.

A winding staircase leads to the attic. The attic has a reddish brown floor with here and there brown tiles, to give the floor some structure. It contains furthermore six green chairs. The attic is left empty to reduce the part count and by doing so, the owner of the set can add some self-made furniture.

Winter/non-winter model
The primary model is the winter model. This model has snow covered roofs and fences, snow remains on the platforms and a Christmas tree inside. The non-winter model has none of the above; the snow remains on the platform are replaced by smooth tiles. Due to the maximum part count of a Lego Ideas set (3.000 parts) I was unable to find a way to include dark red and black tiles for the roofs of the non-winter model. This results in mostly studded roofs. In my opinion smooth tiled roofs would have been better, but I couldn’t find a way to reduce the part count; I already made it as part effective as possible to come to this model within the part count limit. I’ve tried to make the model smaller, but I didn’t like the looks of it.

The last three photo's above show the non-winter model.

Video
For more information about the model, check out the video that I made about it: