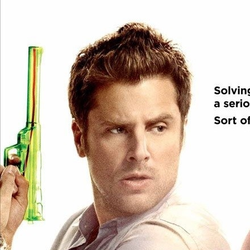 This project is a LEGO set based off of the popular Psych television show which aired on the USA network from 2006 to 2014. The show revolves around Shawn Spencer and his side-kick Burton Guster (or "Gus"). In Psych, Shawn uses his Sherlock-esque ability to notice every detail to convince the Santa Barbara police department that he is a psychic, and to let him help solve crimes. This set specifically depicts the scene from the season 7 episode "Santabarbaratown 2", in which stars Shaun and Gus accidentally sit on a landmine planted under the couch at their Psych offices. Coming to the aid of their consulting psychic detective is Detective Juliet O'hara, Detective Carlton Lassiter, Coroner Woody, Chief Karen Vick, and Shawn's dad Henry Spencer. Can they remove the device before Shawn and Gus accidentally activate the bomb?

This set includes Shawn, Gus, Juliet, the Chief, "Lassy", Woody, Henry. It also includes Shawn's "Psych" cellphone, the psych-mobile (aka the Blueberry), weapons for the police, Woody's body bag, the couch with landmine, and one pineapple. This set will be fun for anyone who's ever watched Psych, as well as any action or detective enthusiasts.