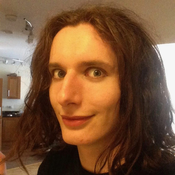 Originally, I just built a rough version of the narrowboat that I live on, but I wanted somewhere to put it, so I built a little of the canal, and an approximation of a bridge I used to live near. As you can tell by the unrealistically clean state of the water, this is a somewhat idealistic vision of Britain where there's quite a bit less pollution in the canals, though there is the obligatory discarded bicycle. I'd have gone for a shopping trolley, but I couldn't build a good one.
As I've mentioned, the boat itself is a bit like mine, but not so much that I'm doxxing myself with it. It has a sink, a fireplace, a sofa/bed and a television. There's of course a tiller and a speed control at the back, along with a place to fill up the water tank at the front.
The canal itself is bound by the typical concrete barriers, with a bit of a towpath at the side, barely narrow enough to walk along under the bridge, which is about the most accurate bit of it. One side of the canal is quite nicely taken care of, with a bench, a post box and flowers. Meanwhile, on the other, you get some thorns, a rat and a discarded bicycle, again, for accuracy.
The bridge is an old limestone construction that's somewhat in need of repair, but usable by small vehicles like milk floats for instance. You can see Lancastrian roses on the bridge, but there are alternative white ones available if you want to change the location. And no canal or river is complete without a willow tree nearby; this particular one is home to a squirrel.
It wouldn't be much fun to have a bridge without something to go both over and under it, so there's a little milk float to supply the locals and ensure they can continue enjoying their tea.
The part count for this is 2,900 pieces, with some room for trimming in the structure beneath the build, some of the tiles and other details - especially on the water.
Please support this, so I can have a model of my home in my home.