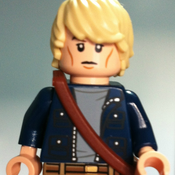 As in science fiction from the early 20th Century, Venus and Mars are both inhabited.  Venus is a lush world, with a decadent and mysterious civilisation.  Its great cities are renowned for their splendid palaces and temples.  The cities of Mars crumbled as the oceans dried.  Now Mars is a barren place with vast salt plains and bare mountains.  Its ramshackle ports and markets are the haunts of mercenaries, bounty hunters and black marketeers.

Travelling between Venus, Mars, Earth and Luna in their small but trusty plane are our (anti)heroes, a trio of (ray)gunslingers willing to take on any adventure for cash: a daring earthman, a beautiful Venusian, and a surly man from Mars.

The Oracle Bird answers yes/no questions by choosing from the different feeding bowls.  Any disputes that arise can be settled with a duel.  But beware: the Venusians pray to many strange and ancient Beings!

This model could potentially be part of a new Space subtheme inspired by classic sci-fi stories.

The two food carts are from the markets of Mars.

(Photographs are in black and white because the model has not been built with the desired colours.  The two colour bars represent the primary colour ranges for Venus and Mars respectively, with the colours to the left being more predominant than those on the right.  The foliage on Venus is dark blue with purple flowers.  Soft furnishings are also purple.  The sloping towers on either side of the Venusian lord's pavilion are artificial waterfalls - the central slopes should be in transparent light blue.  The lamp and weapons are gold.)