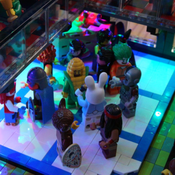 The Dockland office building is located in the Port of Hamburg harbour on the old UK ferry terminal pier.  It is a rhomboid design angled at 66 degrees.  The building is 21m wide and each floor is 86m long. On top of the 5th floor is a rooftop restaurant and terrace.  Designed by Hadi Teherani who also lives in Hamburg.

The Rathaus, or City Hall, was built between 1886 and 1897 after the original building was destroyed by fire in 1842.  It is the seat of government of the Hanseatic City of Hamburg, located in the city center at the Rathausmarkt (city hall market).  Building height is 112m and it has 17,000m of floor space.

The Heinrich Hertz TV tower was erected between 1966 and 1968, to a height of 279.2m.  Named after the German physicist who proved the existence of electromagnetic waves.  The unit of frequency, Hertz, is named in his honour.  The tower was designed by Fritz Trautwein and is near the 'Planten un Blomen' city park.

The Radisson Blu Hotel Hamburg was build between 1970 and 1973, and stands 108m high making it the second tallest building in the city.  It features 32 floors and 556 rooms, and had direct access to the Congress Center Hamburg (CCH).  It was formerly known as the Hamburg Plaza Hotel under various management companies.

The Port of Hamburg is located between the North Sea and Baltic Sea.  It is comprised of 42 terminals with 320 berths that handle project, liquid, suction, bulk and grab cargo.  Out of the 135 million tons handled in 2017, 90 million tons was container traffic.  It is the third largest container port in Europe, and container ships with capacities of just under 21,000 containers have been handled there.  The port celebrates it's 829th anniversary this year and 50 years of container service.