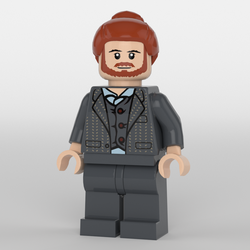 Leewan
25
To keep the visitors of the Park entertained during night time, Doctor Wu had the idea of creating a range of bioluminescent species that we could display during nocturnal shows. This one, that we called Spinovenator ("spined hunter"), uses genes from carnotaurus, spinosaurus, giganotosaurus, and aequorea victoria, a bioluminescent jellyfish.
It can move on land, as well as underwater (in a separate area from the mosasaurus, of course), where it can track all kinds of preys.
The main idea with this creation was to build a spinosaurus-like hybrid with the wings of the Grimroc Stone monster from the Nexo Knights set 70351 for the sail. This part dictated the overall colour scheme of the model, and its transparency allowed me to create the bioluminescent effect. Unfortunately it can not be built (yet) with physical bricks due to many parts being unavailable in those colours. Plus, a physical build would probably not be able to stand on its own and thus would require a support.
25