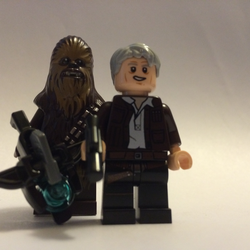 Well, you guys said to get crazy, no limits, so here goes! Imagine a future where every single LEGO brick contains a chip that can listen and respond sonically! And as you build they intelligently link to each other, knowing they are part of that creation. You can say, " Hey creation, you're police car number one!" and it will know it.
Say a citizen of LEGO city is in a car crash and needs assistance! Just call out to the fire station and lights go on, radar dishes rotate, garage doors open! But they don't know where to go, so you call out to the minifigure driver and he calls back to let you know where to go!
Easily get your motorized trains and gadgets to execute their functions by naming them and then using the name to tell it what to do! "Hey Disney Train, go forward slowly." And it will. "Hey Mechanoid Robot henchman, step on the heroes!" and it will try, but your heroes are too much for the giant evil robot! Victory!! Your voice activated laser turret disabled the robot's cooling vents and disabled it!Legoland is safe once again!
Now say you're building your greatest galactic space cruiser ever, but you drop a small piece on the floor! Just ask, "Where did you go? And the recently dropped piece will cry a little, then emit a sound to guide you to it!
With this technology you can give characters missions, give instructions and get responses, find bricks, plates, and pieces in your storage container, build complicated, programmable devices and games. You can even have conversations with Rachel and Phoebe in the Central Perk coffee shop, or your space rangers as they explore the distant reaches of the galaxy. "Commander Bryce McBrick, divert energy to shields!"  "Aye aye Commander!" he says. Pirate treasure hunts? Hide and seek, Battleship, you can make it happen.
Completely voice programmable, smart LEGO. They probably tell jokes too, I mean, have you seen the movies?
Hey, it's pie in the sky, I know, but wouldn't that just be cool?
0