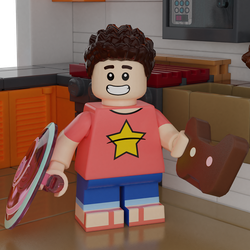 Brick.Cucumber
1
'What weighs five ounces, sits on a Bastion, and is very dangerous?'
'A Ganymede with a machine gun!'
I based this model on the design of 75987, as I felt the orange hues of the Omnic Crisis skin lent themselves to the junkertown theme nicely. I modified this model with the aim of giving Bastion the 'torn apart and stitched together' look of Junkertown. As well as adding some changes to his armory.
This model features armour modifications in a rusted samurai-esque look, as well as some spiked armour to allow him to damage enemies without a weapon. I modified his machine gun and gave him an automatic shotgun, better suited for the fast paced wastelands of Junkertown. I also replaced some of the once beautiful metal armour with some more scrappy and bodged armour look with scrap metal.I also replaced his other hand with a arm inserted sword better allowing himself to fight in the more hostile environment. I even modified Ganymede to get him into the Junkertown spirit!
1