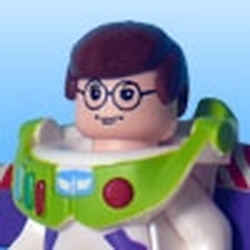 After moving back to the suburtbs, the Incredibles invited their friends over for a BBQ for Dash's b-day! Dash is playing with his new toys and accidentally splashes Violet with water as he runs over the pool, but she's able to deflect it using her shield powers. Meanwhile, Elastigirl is putting the finishing touches on the decorations as she hangs up a banner by herself by stretching her arms. Frozone has just joined the party and is also using his powers to help decorate by turning the Incredibles' fountain into an ice sculpture. Mr. Incredible is by the grill holding a huge platter of food with his super strength. Jack-Jack is helping him grill the meat with his fire powers. Edna is throwing away an old cape that she found in Bob's closet while a racoon is stealing some trash. Just as they're about to eat, the party is crashed by Bomb Voyage and the Underminer! Presents, cake, and fighting bad guys? Best b-day ever!

Note all of the Pixar easter eggs as seen in the Incredibles movies!