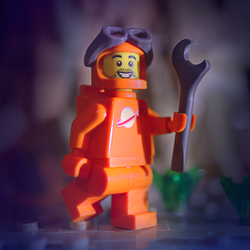 From giant crystals to strange alien creatures, The Space Miners' Cavern is full of surprises! A heavy-duty trapdoor protects the valuable energy crystals below and doubles up as a way to keep the local inhabitants from making unexpected visits to the surface (at least theoretically).

I added lots of fun details to this scene including: giant crystals, crystal veins in the cavern floor, stalagmites and stalactites, colorful alien creatures, lime green tentacles grabbing a crate of crystals, a heavy-duty trapdoor, a detailed mining robot, and of course five space minifigures. I built the cavern base using the "Studs Not On Top" building technique, and used side connecting bricks to attach the rest of the cave to the flat surface.

I did my best to make it a fun and creative scene. Thanks for checking it out!

Note to LEGO: I built the cavern using bricks in a couple different shades of dark gray, but if it's selected, I can use all "dark bluish gray" colored bricks if needed.