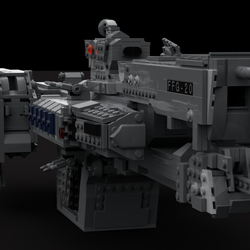 Sbeev
5
This is the battle of Christophsis as seen in the beginning of the Star Wars the Clone Wars movie. The scene takes place while the clones and Jedi are being attacked by B-1, B-2 super battle droids, and Octuptarra droids.

The clones and Jedi have four AV-7 Anti-Vehicle Cannons and two AT-RTs in addition to a large fortification as seen in the movie. In front of the fortification are some more clones, Commander Cody, and Obi-Wan Kenobi leading the defense against the droids. In the back of the model is Anakin Skywalker and Captain Rex attacking the Octuptarra droids with the help of some of Rex's Troops.
The model consists of 10842 pieces and around 150 figures.
The heavy cannons, AT-RTs, and the Octuptarra droids are all original designs and not Lego sets.
I decided to make this battle because the Star Wars the Clone Wars movie was one of the first Star Wars films that I saw and the battle of Christophsis is one of my favorite battles in Star Wars.
5