The Simpsons - The Krusty Burger 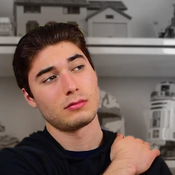 About the model:
Introducing, the most iconic restaurant in all of Springfield best known to The Simpsons, The Krusty Burger! Including (nearly) every detail known to the beloved show, I've recreated this remarkable restaurant in LEGO form. I've attempted to capture some of the most classic and memorable moments portrayed by the show which I hope both LEGO and Simpson fans can appreciate.
If this Project becomes an official LEGO set, I know that both LEGO and Simpson fans would be very happy to see the long awaited return of this short-lived LEGO Simpsons theme. Imagine holding in your hands, an identical copy of the classic Krusty Burger, a restaurant that would not only appear on a TV screen, but a restaurant that would as well appear as an interactive creation. Whether you're recreating a specific scene from the show or creating a scene from your imagination, this set is a must-have. In the long run, the model would make an excellent addition to the current line up of The LEGO Simpsons theme that we all know and love!
Background:
I was initially very surprised by the lack of Simpson themed sets that LEGO has put out. The lack of these sets created many future set possibles to come and further expand Springfield! Given the show's success, and with it being the longest-running TV comedy, I would've expected LEGO to release many more sets. With greatly enjoying both LEGO and The Simpsons, I found it to be a perfect opportunity to take on this fun and somewhat difficult challenge of both building and designing none other than The Krusty Burger!
Features and details:
Model's Info:
Piece Count: 2996
Krusty Burger measures over 5.4" (13.7cm) high, 14.8" (37.6cm) wide, 13" (33cm) deep.
Orange Station Wagon measures over 2" (6cm) high, 2" (6cm) wide, 6" (15cm) deep.
Built in LEGO Digital Designer, BrickLink Studio, and Mecabricks.
If you're a fan of this model and wish to see it become an official LEGO set, make sure to Support and Share this Project!
I'd greatly appreciate all of the Support that you guys give!