Fan Vote - Music To Our Ears

It's time to cast your vote for your favourite model, in another fan vote, after our judges have picked their favorite music related models! With so many incredible choices, the judges had a real hard time narrowing it down to just 9 selections. Thanks again to everyone who poured in so much creativity into this contest to show us so many different ways of 'seeing' music.

Click here to cast your vote! (You can scroll down to view the entries and our judges comments below)

Remember, you only have one vote, so use it wisely! The vote will be open for two weeks, from April 27th, 2020 until May 11th, 2020. Based on the community votes, there will be one Grand Prize winner and three Runner Up winners.

These entries that have reached the Fan Vote phase, will also be included into a special review by the LEGO Ideas Review Board that runs separately to the fan vote and will stand a chance of becoming an official LEGO Ideas set IF* one submission can wow them enough.

IF the Review Board decides to approve one of the contest entries as a Product LEGO Ideas product, the winning fan will be compensated as a Product Idea prize winner as outlined in the Product Idea guidelines and Terms of Service. Meaning they will receive the following:

Our Picks for the Fan Vote

In no particular order... It's a beautiful display piece and we take our hats off to creating a life-like sculture with plenty of expression in a otherwise blocky medium. The added ink pen and blotches for effect add to the overall mood. Additionally, Beethoven as the theme of the build, is a classic that everyone knows represents classical music. 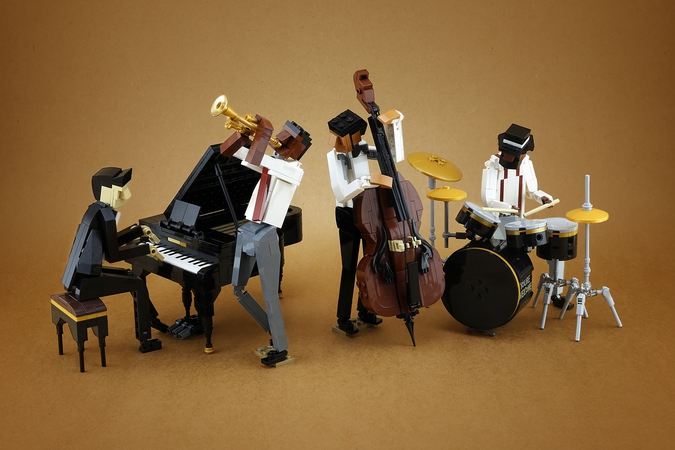 Just looking at this build we can hear the jazzy tunes that this quartet plays. The stance of the trumpet player in particular shows that he's really feeling the music. We love the character design - detailed yet abstract. We love that the creator has even "dressed" them up to give them a bit of an old-school feeling, and we're particularly impressed with how the creator has managed to give the drummer suspenders! Although perhaps a bit difficult to see for some, the red and white windmill in the back was one of the first things that stood out to one of our judges, marking it as iconically Gorillaz. But then that's certainly just a small piece of the puzzle, as this submission brings together a number of iconic elements from the bands' celebrated music videos in this colourful tribute. The plastic beach setting is also very iconic to the band and could make for a great LEGO playset. 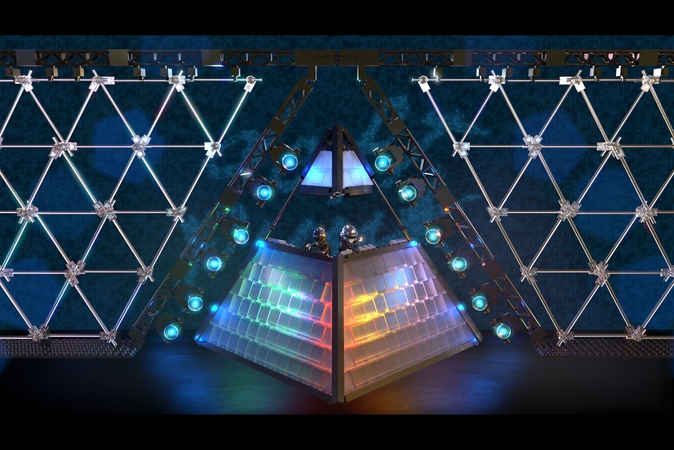 There's no doubt that Daft Punk is an incredibly iconic band and representing them on this famous stage is one of few ways to do them justice. We do love how the creator has brought the whole thing to life however with a lighting setup using existing LEGO power functions lighting and various transparent coloured elements. 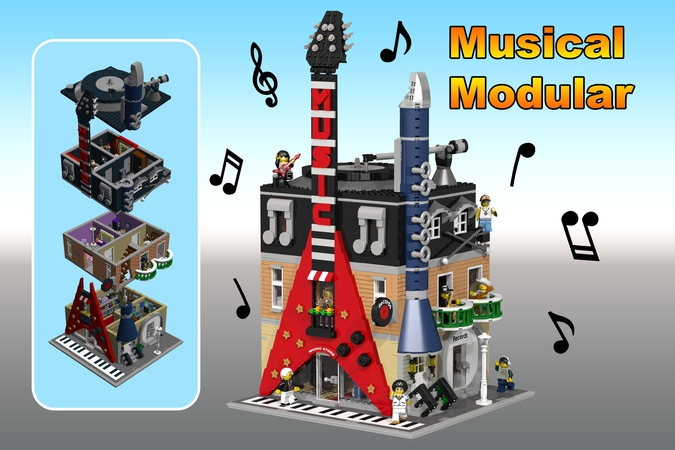 We love the playfulness of this design that incorporates everything music into it, from a recording studio and record store to practice rooms whilst also being topped off with a wild exterior decoration featuring iconic instruments. The selection of minifigures also brings a smile to our faces, as it represents a wide variety of musical eras and tastes and trends, from electronic and disco to rock and classical. It's safe to say that Queen has had quite the resurgence in popularity over the last 2 years and so it was not surprising to see a number of proejcts based on the iconic band. This particular project caught our eye for capturing so many details of the band in a modular way. In that sense it makes for an interesting potential product as one can display it all together or in its separate parts. A tribute to the Bohemian Rhapsody music video is also strongly present centrally in the build. Not only does this creation have a very nostalgic appeal and would fit in as a vintage display piece in many homes, but it also has a playful aspect to it that this main photo doesn't reveal well enough. Turn it around and it's a fun playable interior that shows the inner workings of this radio that's maintained by its caretaker Mr. Radio. The "glass" vacuum tubes in the back really give it that retro vibe. We couldn't help but fall for this intricately detailed guitar and it's additional Fender amplifyer shown in one of the creator's other photos. Although it's not functional, and is aimed to be displayed, it's instantly recognisable and includes plenty of impressivel building techniques to create the necessary iconic shape in a small form factor. Which colour would you pick? As opposed to some of the more traditional instruments we've seen, the organ grinder certainly is a different type of music instrument that's less known, which is why this stood out. From a beautifully decorated organ to a highly detailed organ grinder, whose moustache is spot on!

You can still check out all the cool entries and comment on your favourites on the individual contest pages.

Following a thorough review of the submission SONY WALKMAN TPS-L2 1:1 by Patrick60 we have made the difficult decision to remove this submission from the contest, as we have determined that it does not sufficiently stand apart as an original design. While we highly encourage members to inspire others and be inspired by the community, we are not able to approve the submission of designs that lend too heavily from other LEGO designs - be that official models or fan creations.

The decision has been made taking into consideration that when basing one’s creations on an object that exists in the real world then some similarities may certainly occur, especially when building at the same scale too with a limited variety of LEGO bricks/available techniques. However, in this case, we have determined, on a building technique and element use level, that the submission didn’t differ enough even though everyone is free to create their own versions of the same real-world object.

As a result of this, you may or may not have noticed that this ‘Top 10’ has shrunk to a ‘Top 9’, which we will continue the fan vote with. We will not be re-setting the fan vote and we will not be adding a 10th submission to the fan vote. Members who have already voted for the SONY WALKMAN TPS-L2 1:1 will have their vote returned to them in the coming days, so that they can vote again.

We want to thank the community for helping to bring this to our attention. It’s difficult to know absolutely every LEGO fan creation in the world, and we’re thankful that we have a community who are so knowledgeable and passionate.