When we launched LEGO Ideas last year, we set a one year time limit for all projects to reach 10,000 supporters. Over time we learned that wasn’t quite long enough, even for some of the best projects. So for our first birthday, we devised a way to save the projects that show big potential, while still cleaning up old, abandoned projects and those that haven’t gathered large followings over time. Now, LEGO Ideas will give projects an initial one year (365) days, and will award more time to projects that reach two supporter milestones: 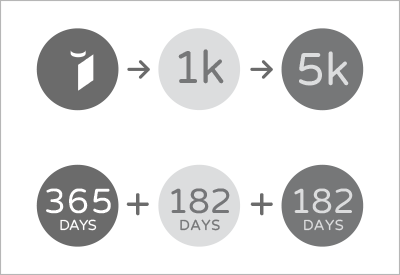 What does this mean for your project?

Going forward, if your project reaches 1,000 supporters within its first year, it’ll have 182 days added to its “days left” clock. If your project continues growing and reaches 5,000 supporters, it’ll receive a second boost of 182 days. This means, projects that reach these supporter milestones in time now have a maximum of two years (729 days) to reach 10,000 supporters.

Your project must still reach at least 1,000 supporters within its first 365 days to continue; if you don’t hit that milestone, your project will still expire. At that time you’re welcome to re-submit your project and start over.

Existing projects that are less than two years old as of April 30th also benefit.

My “days left” clock hasn’t changed yet. How do I know if my project will receive extra time?

We want to give you a heads-up this change is coming, so today we have updated the time limit section of the Project Guidelines and House Rules to reflect how we give extra time to projects, however as of this post, projects’ “days left” clocks are not yet updated.

On April 30th, we’ll take LEGO Ideas offline briefly for a maintenance update that will extend the deadlines for applicable projects. Projects whose deadlines won’t be extended will display “Less than a day” left and then expire; please note our system does not display a precise countdown clock. So when LEGO Ideas is back up and running, your “days left” clock will be up to date!

Since there are over 10,000 projects active on LEGO Ideas, unfortunately we won’t be able to answer everyone individually about whether or not your project will receive extra time. Our software will calculate this automatically on April 30th. As a general rule, if your project is two years old or older on April 30th, it will still expire. If it’s less than two years old, and has reached its key supporter milestones in time, it won’t expire on April 30th.

Also please note that these changes to our time limits are also reflected in a revised Terms of Service 1.1, along with some new language that specifies potential tax obligations for members who receive compensation in the event the LEGO Group commercializes your project.

We hope that by giving extra time to qualify based on reaching these milestones will encourage more people to support your projects and keep them in the running. By giving successful projects up to two years to reach 10,000 supporters, we’re confident a wider variety of projects have the opportunity to be considered as potential LEGO sets in the LEGO Review.