Interview with Andy Clark, fan designer of 21304 Doctor Who

Andy Clark, fan designer of the LEGO Ideas Doctor Who set, took the time to share his LEGO building history and some reflections on building and promoting his project. Check out what he has to say, and see some great photos of the proud designer and his official LEGO set! 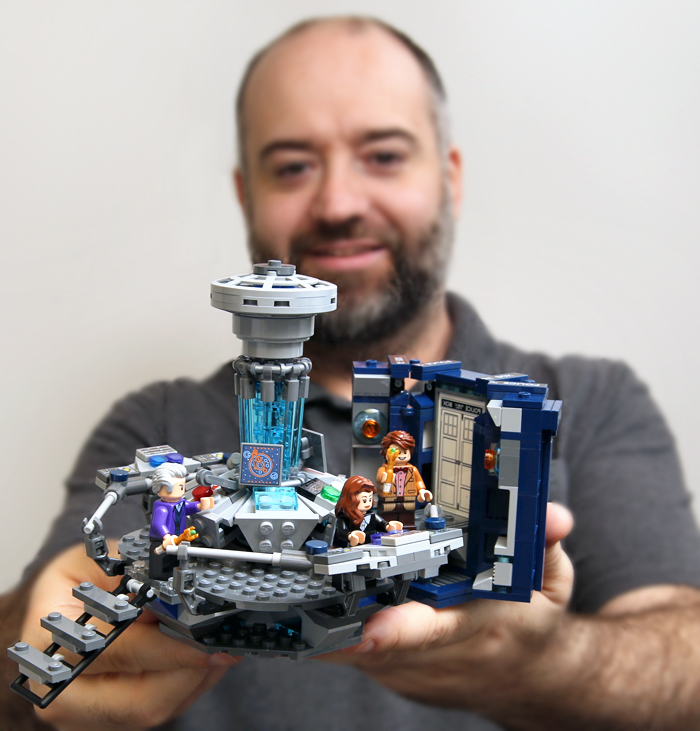 Tim: How long have you been building with LEGO bricks?

Andy: I first started building with LEGO with my brothers, I was around 6 and my older brother had the LEGO Technic 8860 car. Soon he, my younger brother, and I were also buying sets, and we got to a point where we had enough to make what we wanted. We used to build vehicles and smash them together to see which design was strongest! Of course I would never do that now, I'm like the dad from the LEGO movie, “don't touch my LEGO!” but back then it was fun! We also built safes and the challenge was to find out what combinations of parts and movements would open it. When I went to college all the LEGO we had went to my nephews.

What inspired you to build this model and put it on LEGO Ideas?

Around 2013 I got back into LEGO. I found forums, and LEGO Cuusoo, which is now LEGO Ideas. When LEGO Ideas announced they would accept Ideas based on Doctor Who, the thought of combining my two interests was too much to resist. This and the thought of having an official LEGO set based on my design inspired me to create a design and put it on LEGO Ideas. 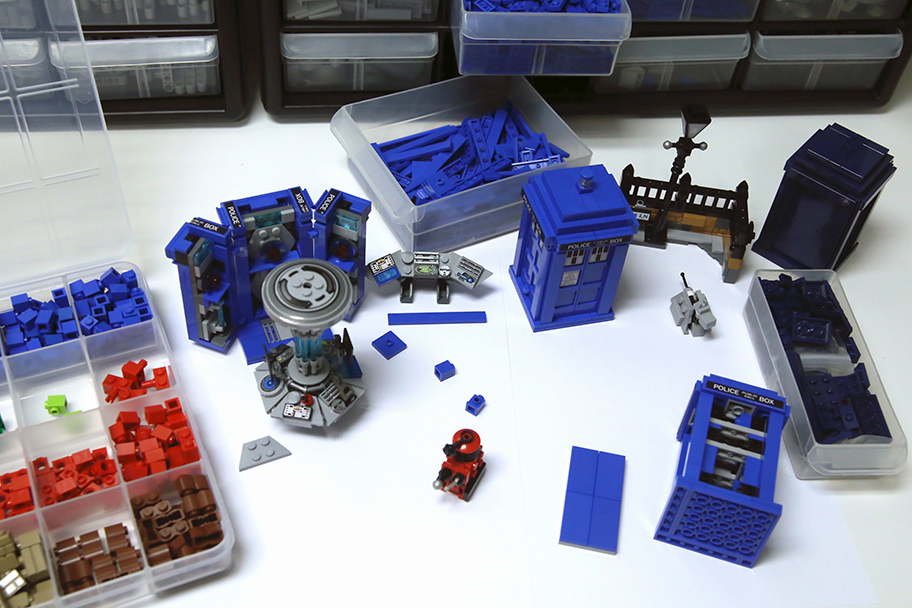 Did you run into any challenges when designing these models?

The two biggest design challenges with my set proposal were the console and the TARDIS box itself. Getting the console six-sided was a challenge, as there are only a few elements that would allow this. The Technic wheel pulley made it possible. 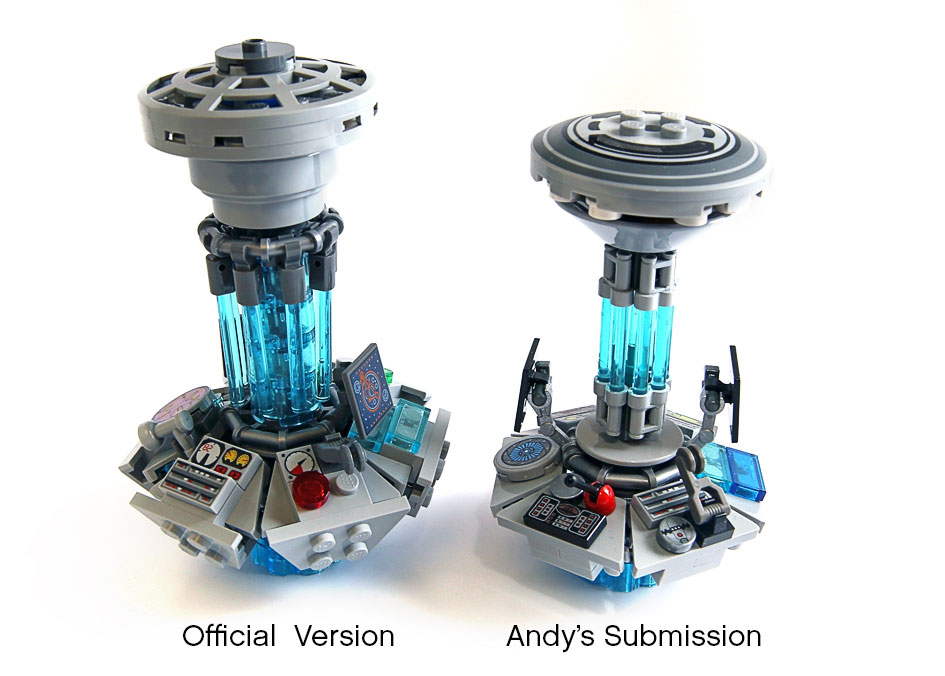 For the TARDIS, I wanted to create the most accurate detailed LEGO model I could, while allowing it to open up and emulate being “bigger on the inside .” These two goals were initially at odds with each other; I didn’t want to sacrifice the exterior looks for the opening feature. Visually for the exterior I wanted the 1x3 tiles with the Public Call Box text, to protrude out further than the other TARDIS side details, but doing so put them further out than the center point rotation of the hinge plates. As a result the hinge plates would not rotate open.

After a lot of iteration the solution was to have the 1x3 tiles attached to a hinge brick, and they rotate up to allow the hinge plates to open up the TARDIS. An added benefit is the hinge bricks when down act as a lock, making sure the exterior TARDIS did not open when the intention is playing or handling it closed. It feels only right that since the real TARDIS folds space and time, that the LEGO version folds too. 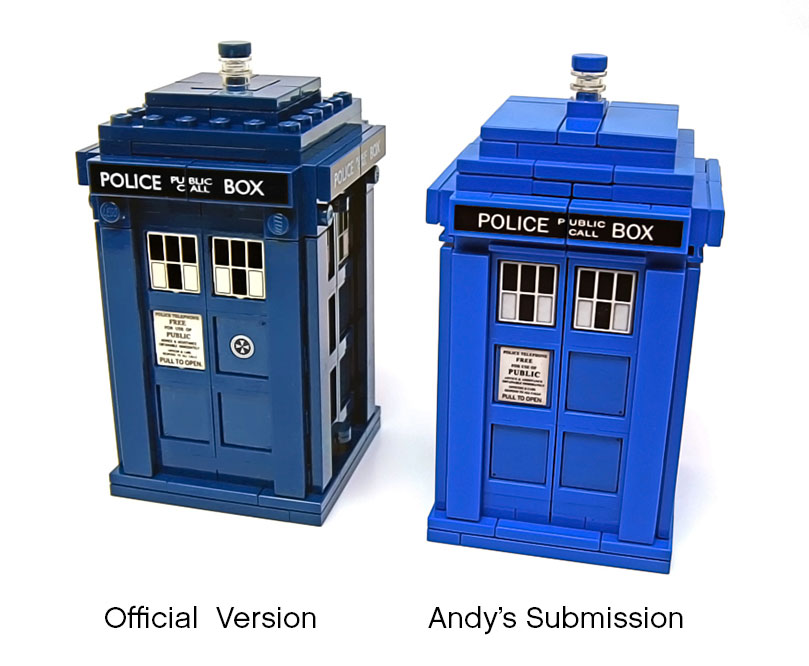 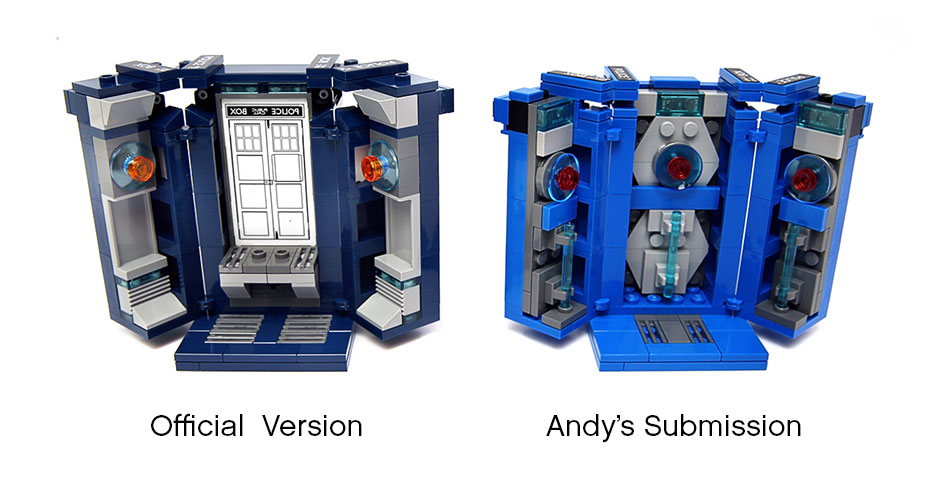 What did you do to promote your project?

I knew David Tennant is very popular with Doctor Who fans, so I made sure to heavily promote his character in my project using social media and Doctor who fan sites. I also tried to get the sites with the highest viewing figures to do a feature, or post to help promote. Buzzfeed did an article and helped get around 25% of votes needed. My wife Susan also helped to promote. A video of the set in action helped too.

What advice can you give to other LEGO Ideas members with active projects?

Getting my project to 10,000 votes took as much work promoting as it did designing. Promote and update your project on a fairly regular basis to maintain momentum. Think of relevant sites to promote, in my case Doctor Who fan sites. Add a video showing the build in action and its play features. If you initially build in a 3D program such as LEGO Digital Designer, update with photos of the model built with physical LEGO as a proof of concept. Many times I have built in LDD then when I built in real LEGO issues related to stability came up, and I’ve had to make design changes for the physical model. My designs are usually overly complex at first; the skill is finding a more simple, and more structurally sound design that maintains the look and feel as much as possible. Building physically also adds peace of mind so if it reaches review when built by LEGO designers it will work. Try to think of fun updates, extra options for the set, milestones, thanks for 5000 supporters, links to where it's been promoted, and engage supporters in the comments. These things all help keep the interest up.

In closing, I’d like to thank Sam and Adam for taking my design and turning it into an official LEGO set. A big thanks to the whole ideas team, and everyone involved in the process of making this an official set on shelves. It truly is a dream come true.