Interview with Angus MacLane of WALL•E

“I was inspired to build a LEGO® WALL•E shortly after I started working on the WALL•E feature film at Pixar in the fall of 2005. The character had yet to be completely designed, so I was in a unique position to create a LEGO [model] at the exact same time as the subject matter was being developed. 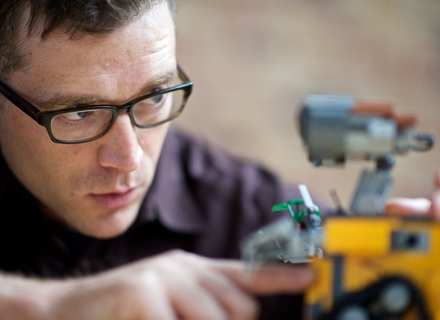 Angus MacLane got to experience the LEGO Ideas development process both as the fan designer of the set, LEGO® Ideas #011 WALL•E, and representing Pixar as the licensee approver for the model.

“When I started this project, it was so early in the design process of WALL•E that his final coloring had yet to be determined. So I first built him in light gray and then later went back and rebuilt him in the iconic yellow.”

You can see the original model below. 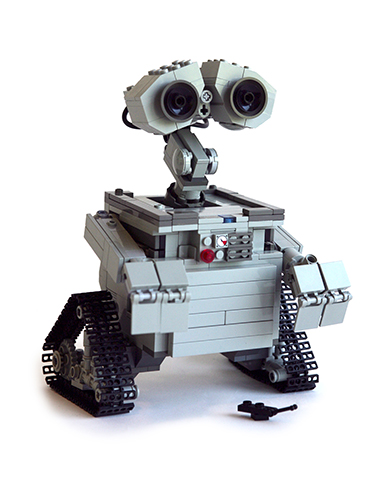 The model went through many revisions over the next decade, including challenges related to the trends the eyes.

“In 2005, when I started building WALL•E, the largest tread element was only 3-studs wide and this was a little on the small side for the scale of the model.”

In 2007 however, a 4-stud wide tread was used which was not only the right scale, but looked more accurate.

“The other area that went through the most revision was the head and binoculars. I was convinced that I was never going to be able to figure out a solution for the raised ridge around the eyes at the scale I had chosen.  So I initially went for an eye design that sought to mimic the ‘impression’ of the eyes but was technically off-model.  That was the best I could do, unless LEGO was going to make some sort of human scale binocular element.”

Just the element he needed came out in 2012, and as you can see from the image below, it really made a big difference. 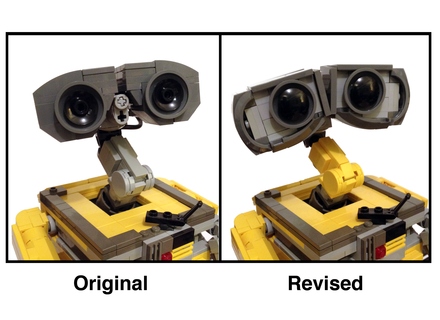 “That was a huge lesson for me. If the right element doesn’t yet exist, just wait a few years.”

Of course, LEGO Ideas (or even LEGO CUUSOO, as it was known when it launched), wasn’t around in 2005. When Angus built his model of WALL•E, it was just for fun. After he became familiar with  LEGO Ideas, he knew WALL•E would be a good fit. And in just over a year, it had reached 10,000 votes.

“It took a lot of time and energy to get 10,000 votes, especially for a character that is as well-known as WALL•E….It felt a little like starting a rock band and trying to get people to come see your shows. You tell your friends to go and see you and at first, they do... But then, after one or two gigs, your friends don't want to come see you anymore because you only have three or four songs and they don’t really like bluegrass-punk-fusion.  So how are you going to generate new friends and new interest?”

Luckily, fellow LEGO Ideas members were able to offer helpful happy to give advice. Angus started posting updates to his project, and soon found that updates revising the model itself had the biggest impact.

“Reworking and improving the design was the shot in the arm the project needed. This led to more exposure and blog posts that resulted in more votes and more momentum.”

This momentum kept the project on the “Popular this Week” panel on the front page of LEGO Ideas, which helped highlight it to new visitors.

“The LEGO Ideas folks always say that just getting the 10,000 votes is a true achievement by itself, and let me tell you, if anything, they are understating it.  Hats off to anyone who has been able to do it.”

Angus also found a lot of his supporters on Social Media sites such as Twitter. The director of the WALL•E feature film, Andrew Stanton, also got involved. 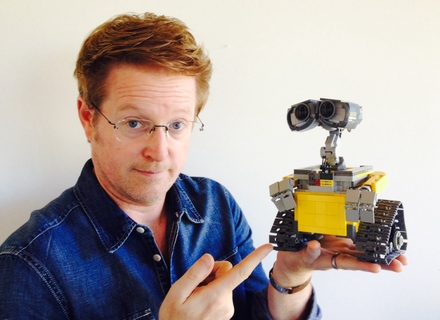 Andrew Stanton with the model 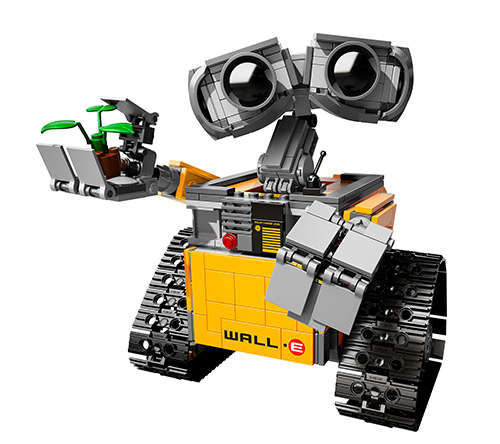 “I still haven’t fully processed that WALL•E is going to be an actual LEGO set. What a dream come true.”

If Angus’ name seems familiar to you, it might be because he’s no new face in the LEGO adult fan community. He created the CubeDude ® building format. 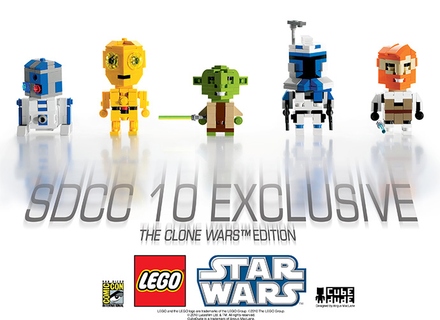 Everything started 37 years ago, when a two and a half year old Angus was given the LEGO 425 Forklift (his parents ignored the age recommendation).

“Almost instantly, those 17 interlocking pieces became my favorite toy. I brought it with me everywhere until one day I accidentally got the pieces hopelessly mixed in with another kid’s LEGO collection.  My parents sifted through the giant LEGO pile, but after a lot of searching, it was clear they were not going to be able to successfully resurrect the whole model. I was inconsolable. On the way home we stopped and got a replacement set. My parents believe that this early trauma of losing my very first LEGO set was responsible for my lifetime obsession.”

One final thing from Angus…

“I just wanted to take this opportunity to publicly thank to the entire LEGO Ideas team, and specifically Daiva Staneikaite Naldal who managed the project and Design Lead Steen Sig Andersen. I know that for confidentiality purposes, we’re not supposed to talk about the depths of the LEGO Ideas development process, but let me tell you this: I found the whole experience to be a total joy. We worked together for months in a truly collaborative process. Everyone was incredibly patient and accommodating in sharing the LEGO experience with an outsider like me. The LEGO Ideas process has made me a better builder and yielded a LEGO WALL•E that is better than I could have ever imagined. For that you have my sincerest thanks.”