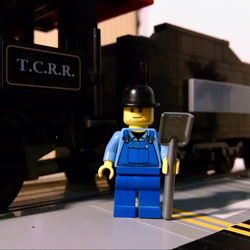 This Lego model is based off of the Virginia & Truckee R. R.'s locomotive 11 the Reno and to help with accuracy I have built the locomotive, tender, and  passenger car 8 studs wide to help with realism. 'Reno' was built in 1872 by Baldwin locomotive works. She is the oldest V&T locomotive still existing today. Reno was the favorite locomotive of the V&T, and was nicked named 'Brass Betsy'. She was keep polished her entire life and was the primary locomotive to pull the express train between Reno and Virginia City. Originally a wood burner, she was converted to coal in 1876, and to burn oil in 1907. The picture above is Reno as a wood burner because of diamond shape smock stack. She was the first V&T locomotive to be converted to burn oil. In 1945, she was sold the movie studios, where she performed in over 20 movies, TV shows, and commercials. She is currently residing at Old Tuscon, where she has been cosmetically restored following a devastating fire in 1995.

The passenger car is Virginia & Truckee Couch No.4 and is also 8 studs wide and has two rows of seats for traveling passengers. Built in 1872. Air Brakes were added in 1874. This car has been restored to mid 1880's appearance, and is on display at the Nevada state Railroad museum.