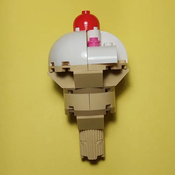 By BrickyMateo018
23 comments
Hi,
I invite you for a ride in the articulated bus of my idea.
The bus features a detachable roof, movable front/rear connection, 10 minifigure seats, and space for a baby stroller. There are green buttons to open the doors. Large windows will allow passengers to observe various views. There is air conditioning on the roof. There is also a luggage compartment in the back.
For my idea for a set, I also include a stop with a trash can.
The idea for this bus arose when I was watching a real one from the window of my house. I wanted it to be like that in my block city as well. Because Lego doesn't have such a bus in its offer, I decided to build it.
I think it would be a great Lego set because any mini-city would need a big and sturdy bus.
In this way, we have already reached the end of the route. Thank you for viewing the project and I encourage you to support it.