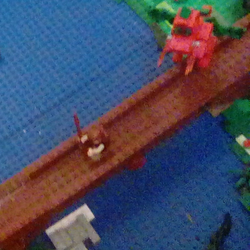 Lego Batman
6
178
days left
This is a old western-style train bridge. I decided to build this because there have not been very many western-themed LEGO sets. I built it in LDD (Lego Digital Designer) and it has 2203 pieces. It has 3 minifigures. I have included many bush elements and a LEGO scorpion. There is a minifigure on a horse. I put 4x4 round plates for steam coming out of the train. There are also vines growing out of the cliffs. In this LEGO model there is a cowcatcher element on the front of the train. I have built cacti out of green bricks and plates.
6
178
days left