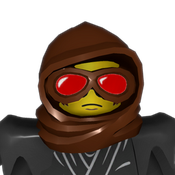 By DaBrick1
17 comments
It is two friends exploring a waterfall that they found while out for a walk in the mountains. We decided to make the waterfall and the background first as this would allow us to see where we could add the other nature features. We attached some leaves and flowers to make it more colourful and to add some interest on the sides of the waterfall. The waterfall is made using see through blue bricks in a variety of shapes and finishes in a pool. We added a cute little duck to the waterfall pool.
We added a tree and a large rock to make the scene look more like nature and as if it was in a mountain. On the rock you will find a large piece of irregular shaped gold which will cause some excitement for the young explorers. There are some smooth grey circles which represent stepping stones and some flowers again, to add colour to represent a mountain meadow. As a final touch we added a camp fire in the forested section of the build so the two explorers could have food or camp for the night as there is a nearby supply of wood and fresh water in the waterfall.
We decided to add two mini figures and dress them as explorers. One of the mini figures is wearing a grey hoodie and has a rucksack with sleeping bag attached. He also has a magnifying glass which will come in useful when he discovers the gold! The second explorer is wearing a blue and orange jacket and also has a rucksack with a sleeping bag although this is in white. He comes with a small pot filled with pea soup which he can warm on the campfire. There are two additional animals, a squirrel  and bird which are keeping a close eye on the explorers as they make their journey through the mountain.
We decided to make this set as we love nature and look at a beautiful mountain everyday from our house so decided to use this as our inspiration. We also have regular visits from many different types of birds and some squirrels in our garden so wanted to include them in the build.
We think this would make a great Lego set as it has many different elements and is bright and colourful like nature. It is a small set but has lots of little details and would make a great addition to someone’s collection.