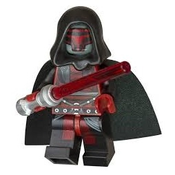 Rogue One : A Star Wars Story

A long time ago in a galaxy far, far away...

Jyn Erso, Cassian Andor and their rebel team enter the high security imperial base at the planet Scarif and got the plans of the Death Star.

To enter the tower and search for these plans, a rebel team attack is perform on several spot to focus Imperial defense. Among these defense there were 4 AT-ACT walkers.

Here are some differences between these walkers:

- head is quite different, and I add a panel at the rear (it still can hold 2 drivers),

Note 1: The container was made of dark orange bricks, orange is too flashy for me. Any inside is orange so you can see the difference.

Note 2: I can't change brick color on legs, so it appears white instead of light bluish grey.