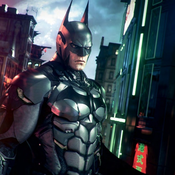 This is a project I constructed about 3 years ago when I was 14 in image of Bob Kane's Batman the Animated Series Batplane. It also is similar to the one which came out in Detective Comics No. 781, June 2003. I also built an amateurish base to withstand the weight of the plane. It is also painted black to mask the variance in colors of the legos, from other sets. The Batplane consists of a wingspan that is 10 inches wide and 13 inches long and 3 inches tall. The plane's features include a sleek aerodynamic body form/style similar to that of the Batman Animated Series one. The Batplane has adjustable flaps in the back of either sides of the wings for flight navigation. The plane's cockpit has a locking mechanism and a fall through floor for quick ejection as in the series. Underneath the plane is unmovable landing gear and air-to-air missiles. Between the cockpit and inner right and left wings are machine guns. At the rear is a infamous jet turbine that propels the plane, as in the tv-show.