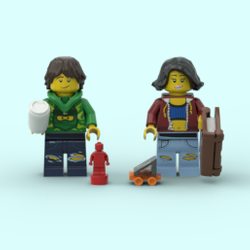 By V and C - Master Builders
14 comments
C and I are both huge fans of LEGO Ninjago. We build many mechs (for the ninja) and iconic ninjago buildings (such as the Borg tower) but never owned a ninjago dragon - one of the most iconic ninjago things.
One fine morning my brother woke me up and said hey, let's build a dragon. I was a bit anxious at first  as we never built a dragon before ( and i knew we wouldn't have enough bricks to build a proper big one). At the end we decided to build a small version of our favourite dragon - the ultra dragon. Since we didn't have a lot of pieces, we made the dragon undeveloped - it has only two heads, tiny wings and it is much smaller than the ultra dragon in the sets. So we decided to name it BABY ULTRA.
The dragon has joints at its tail, legs, ankles, toes, wings, heads and mouth. Its two heads represent the fire and lightening elements. We included legacy versions of Cole, Kai and Sensei Wu ( but C wanted  to include a villain in the submission so we put a legacy version of Lord Garmadon).
Hope you like it! Ninja-Go!