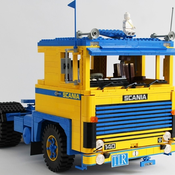 The iconic A-frame Cabin now in LEGO form!
An architectural icon from 1950 to about 1975, the A-frame is one of my favorite rural homes ever, a triangle-design built for lounging on outdoor decks and staring at nature.
An A-frame Cabin or other A-frame building is a building style featuring steeply-angled sides (roofline) that usually begin at or near the foundation line, and meet at the top in the shape of the letter A.
About the set
The brick-built A-frame house diorama amazes for the extreme similarity to the real ones and for the attention to detail. The set is composed by the main building and many minor details all around such as the woodshed, the old boat on the right, the decrepit wooden staircase and others.
The colored larches in the background frame the scene as if it were a postcard.
Two minifigures are included in the diorama, you can discover their fascinating story in the next paragraph.
The set is built with many special and fun techniques, for sure you will love to build it!
Fully detailed interiors!
The A-Frame cabin features a complete interiors with two floors: the upper one with the bedroom; and the ground floor with the living room and kitchen. The whole interior is chock full of details that make the set very playable.
You can easily open the two roofs to access inside and play with the utensils and surprising accessories including table and chairs, a wood stove and many more.
Thanks to the wooden furniture inside you can breathe a warm and welcoming atmosphere, typical of mountain cottages, when it is cold outside and inside there is a nice warmth.
And it's all so enjoyable!
The story behind this A-frame Cabin
Two brothers, Dan and Ethan, burned out on modern working believed that stripping away modern comforts and living more simply in nature would lead to a more spiritually a creatively fulfilling life. They looked for a cabin in the woods and finally found out this old wooden A-Frame Cabin. They fixed up it, and now they live there happily.
The style of the A-frame Cabin
A-frame buildings are an old form known in Europe, China, and the South Pacific islands sometimes called a roof hut and were simple structures used for utilitarian purposes until the 1950s.
Although the triangle shape of the A-frame has been present throughout history, it surged in popularity around the world from roughly the mid-1950s through the 1970s. The post-WWII popularity of the A-frame has been attributed to a combination of factors including Americans' extra disposable income, the inexpensiveness of building an A-frame structure, and a new interest in acquiring a second home for vacationing.
Another factor contributing to the rise of the A-frame included the adaptability of the structure itself, which enabled architects, and LEGO builders :), to experiment with more modern designs. A-frames were a useful medium in which architects could explore their creative side since they were relatively cheap to build.
If you've always dreamed of a house like this now you can build it and have fun!
With your support, hopefully we can turn the A-frame Cabin into an actual LEGO Ideas set.
Thank you all for your support, comments and shares!