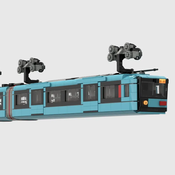 The suspension railway now has rails and a station!

Thank you for your ongoing support! In the weeks since the last update I received a lot of support from the people of Wuppertal and the city itself. Wuppertal-Marketing started a bet that 10.000 supporters will be achieved by the end of February. I was interviewed by Radio Wuppertal and a ton of newspapers, there even was a feature on TV.
In the meantime, I worked on the suspension and presentation of the model, which is now built into a suspension-railway-station that features lots of mini-figures. I tried to fit in as many of your ideas as possible. In the next days I will work to make the suspension-railway even better and patiently wait for 10.000 supporters.
Thank you.
On Jan 05, 2022

In the past few weeks I was overwhelmed by the amount of support received. Not only did I receive tons of support on Twitter and Reddit, the LEGO-Schwebebahn was also featured on the Facebook-page of WDR Bergische Lokalzeit and in articles by Westdeutsche Zeitung and BILD.
While I'm trying to figure out how to fix the suspension of the Schwebebahn and make the whole model hang-able, I tried to implement some of the proposals I received.
Thank you for your ongoing support, new ideas to better the LEGO-model of the Schwebebahn are always welcome.
Manuel