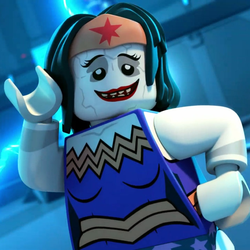 Lego and Laika are a perfect combination. Both the toy company and the stop-motion film company inspire kids to use their imagination to build worlds, create stories, and bring life to their characters. Laika will soon be celebrating its ten year anniversary of the award-winning “Coraline”, a hand-crafted film directed by Henry Selick based on Neil Gaiman’s children’s book. The story of Coraline is about a young girl who has just moved from Michigan to Oregon and is missing her friends. Neglected by busy parents, she occupies herself by exploring her new house and discovers a secret door, behind which lies an alternate world that closely mirrors her own, but in many ways is much better. She rejoices in her discovery, until Other Mother tries to keep her there forever. Coraline must use all her resources and bravery to save her real family and her own life.

The Pink Palace Apartments feature the iconic pink Victorian exterior and film-referenced detailed interiors such as the kitchen, dining room, Dad’s study, bedrooms, bathroom, Bobinsky’s apartment, and of course the living room with the secret door. Other details include the mouse circus tent, cotton candy cannon, Other Father’s spinning piano, and the hidden room behind the mirror. The design is hinged for dollhouse-style opening and access, as well as modular access, meaning each level may be lifted off compartmentally. The footprint is approximately the same as the Advanced Modular Buildings, with stairs that detach from the side and back to allow options for placing between other buildings.

The Characters included here are Coraline, of course, Other Mother, Other Father, Bobinsky, Wybie, Coraline Doll, and the cat. The version of this house is specific to the Other World and so the characters reflect this design as well.

Children of all ages have grown up on Laika’s films, many of which are now young adults. This is a set for fans of Laika, Neil Gaiman, Henry Selick, or just Lego buildings in general. The best part about this house is that you don’t have to be a Coraline fan to appreciate it.

Join me in celebrating the brilliant storytelling of Neil Gaiman and the mind-blowing artistry of Laika Studios by sharing this bit of film-making history and tempting them with this gorgeous play-and-display set.

A giant "thank you" to my husband, children, friends, and colleagues who have been most supportive and understanding. The constant encouragement has really helped me to the finish. Hoping others will love it as much as they do.