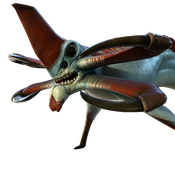 By crazygamer7477
17 comments
It is one of the most or the most commonly found fish in the video game, Subnautica. In the game, it is the second most nutritious fish in the game only behind the Reginald. I built it because I have owned Subnautica since around 2015 (in which it was in very early access) but I didn't actually beat it or get far into the game until now. I believe this would make a great Subnautica set because it is one of the most, if not the most well known fish in Subnautica. Subnautica has sold over 5.2 million copies and many more people have played it. Subnautica is currently getting a sequel, Subnautica: Below Zero which is currently in Early access. Subnautica has received insanely good reviews and will only get more popular as time goes on.