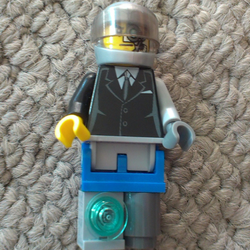 Agent Electro Force's Spy Fighter can shoot out a hook and it has got a chain saw that moves up and down. Two people can fit in it, one of them steers it.

Agent Electro Force is fighting off a Robotic Acid Machine! He must stop the Acid machine from spitting acid at him.