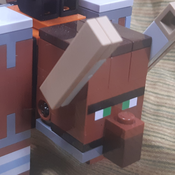 Waka Waka Waka!
The iconic yellow embodiment of hunger makes his way into LEGO form. In this build, two Pac-Man games are held tribute to in this large build with a part count of 2805.
This build celebrates 40 years of Pac-Man with an awesome display showcasing both a 1:1 replica of the original PAC-MAN (1980) and a scene from PAC-LAND (1984). In its entirety, the display consists of 8 modules which can be taken apart for easier transport. 7 of the modules are used to create the PAC-MAN build and 1 of them is used to create the PAC-LAND side display.
They may not be minifigures, but Pac-Man and the nasty Ghost Gang have come to life in minifigure scaled brick-built form as well as micro versions of the five characters to be placed in the maze. The ghosts even have snazzy hats too.
Now let's look into what this idea represents and also maybe learn some Pac-Man history along the way.
PAC-MAN (1980)
On June 1980, Pac-Man made is debut in Japan under the title Pakkuman as an arcade game developed by Namco. His game would later come overseas under the name Pac-Man. In the game, you control the main character Pac-Man who is a yellow and circular blob in an endless maze game where you continuously eat pellets while evading ghosts.
The enemies known as the Ghost Gang consist of four ghosts by the name of Blinky, Pinky, Inky and Clyde. If Pac-Man were to eat a larger pellet known as an "Energizer", all ghosts would turn blue and would be able to be eaten by Pac-Man sending them back to the beginning of the maze. As an arcade game, there was no end to the game but rather you would be attempting to gain a high score.
The Pac-Man build recreates the original maze exactly like you would remember it from the original classic. Included are mini brick-built representations of the 8-bit characters you can attach anywhere on the board as well as a load of pellets!
Many jumper pieces were used in order to let you create your own scene by easily being able to stick the characters where you want them. The game could have simply started or Pac-Man may be on his last few pellets with the ghosts coming at him for every corridor! There are two spare Pac-Man pieces to indicate his life count. Don't forget to chow down on that cherry too!
If you need a place to store away some eaten pellets, the bottom of the maze has a small compartment to stock them away for when you need to restart your game.
PAC-LAND (1984)
Included in the build as well is a tribute to a highly influential addition to Pac-Man's legacy. Unlike the original arcade game, Pac-Land was a 2D platformer game following Pac-Man's journey to return a lost fairy to Fairyland and get back home safely to his wife and son! Pac-Man would be able to walk left, right and he could run and jump.
The ghosts are back wearing hats now and this time, they drive vehicles such as cars, buses and even pogo sticks. Pac-Man can push certain objects like fire hydrants to discover hidden items like helmets, invincibility power-ups and free points in the form of a reference to another one of Namco's games, Galaxia. A Galaxian secret can be found in the build too if you lift up the area around the fire hydrant.
The Pac-Land display showcases Pac-Man's house, some scenery including a bush, a cloud and a mountain and a BREAK TIME sign where an interlude would happen in between levels giving Pac-Man a chance to gain bonus points. The display is also built with the heavy black outlined style used in the game giving it the same cartoony effect that Pac-Land does.
Why Pac-Man?
Why not? I've always had an affinity for retro games at the heart and I'd love to spread my passion for video games by proposing an idea for a Lego Pac-Man product and creating a build for it that stays faithful to the original game yet brings so much to it by being built in bricks.
With all said and done, I sincerely hope you will vote for my idea. It will be a long road ahead but I'm excited to pursue this road to 10,000 supporters!
ᗧ•••