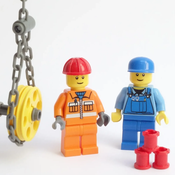 By thoroughfare production
66 comments
Tide Prediction Machine – A wondrous contraption that predicts the ocean tide.
Tide Prediction Machines (TPMs) are mechanical computers which provide an easy but fascinating way of calculating the ocean tide.
I love the mechanics of historic computers and LEGO is ideal to build, understand and run them. This project consists of a simplified version of a TPM and provides an example of how they work. The TPM “Yellow Duck” has 410 parts and is 35 studs long, 11 studs deep, 16 studs high and weighs 0.4 kg
The video shows the circular motion of a crank, with a pin fixed in the crank, which is free to move along the axles. The pulley wheel itself is allowed to move up and down only and converts the circular motion into sinusoidal motion. Its elevation varies by the distance of the pin from the center or the amplitude of the constituent. All elevations are summed by using a continuous band. The band is fixed at one end and wraps around the four pulley wheels. At its other end it has a pointer which plots the height of the tide on the rotating cylinder.
The pulley wheels have the following properties (from left to right):
• K1 (lunar) - amplitude: 0.61 studs; frequency: 24h: phase lag: 54°
• O1 (lunar) - amplitude: 0.39 studs; frequency: 24h; phase lag: 144°
• M2 (lunar) - amplitude: 1.25 studs; frequency: 12h;. phase lag: 126°
• S2 (solar) - amplitude: 0.75 studs; frequency: 12h; phase lag: 0°