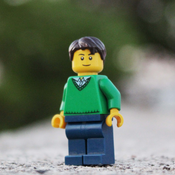 This is a lego german shepherd dog face; its an actual size model, it has some functions like mouth opening and moving ears; it is a great colection set.

I built this dog because I own two german shepherd dog´s that are absolutely amazing, in both their complections, as in their capabilities.

Before I started building this set, I recieved a lego set that included a 2x2 slope tile, I wondered how could I use them in a next set, I realized that they could be for a Lego Train, or for a dog mouth, I started building a train but then realized the lack of some pieces so I opt to build a dog face, and what a better dog than a German shepherd, I started building the set, guiding me in pictures, and in two realy amazing dogs (I could never find a lego german shepherd dog). I built it, and used it as a colection model in my room, and some friends and family were impresed for all the detail that it was on the dog, so I realized it was time to upload it to Lego Ideas.