Flyer One -- The First Successful Flying Aircraft in the World 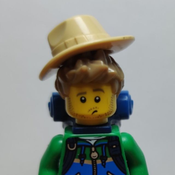 By Shihyen
42 comments
Number of parts: 2607 (excluding base)
It's a little big because I want the wings to look thinner
This is the first successful aircraft invented by the Wright brothers in 1903. This time I used LEGO to make the aircraft invented by the Wright brothers , which can also be regarded as a respect to them. Thank you for the emergence of such great people and great inventions in human history
I try to drive the engine and propeller with rubber band, but studio and LDD can't do it, which is well known
The tail wing can be controlled by the line connected with the aircraft control lever to simulate the effect of the aircraft turning left and right
I believe it will be a very shocking work
If you like this work,
Please support me, thank you