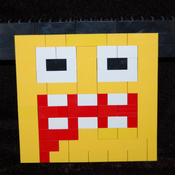 The Frigid Highlands! I am so excited for my 7th project submission. I hope it goes above and beyond my other projects.

This is the story: Once upon a time in a far kingdom, they heard tales of a hidden treasure up in the Frigid Highlands. No one had the courage to bring the treasure to their village, so a fourteen year old boy decides to do it himself. He knows that he is confident in doing it. What he doesn't know was that he was racing an evil greedy soldier from another kingdom to get the treasure first. Before he knows it, he soon finds himself in a tangle of obstacles, attacks, and an epic, intense battle he never thought of fighting...

The set consists of a mountain base plate, a "keep out" sign, two mini figures, a fold-out tower, a ladder, a barrel of gold, and an epic glide pack! If you want to find the hidden treasure, the front side of the tower can be rotated to get the treasure inside.

The first mini figure is the evil greedy soldier who comes with a glide pack, a shield, and a spear. The second mini figure is a courageous fourteen year-old that has a sword and a shield.

I hope that this set seems playable, exciting, and fun, just as much as it was to me. I hope you guys support and follow this project.

Be sure to to check out my other projects and keep being awesome!