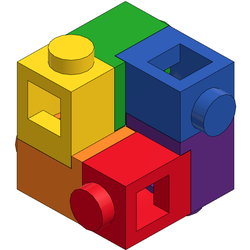 In a few hours we'll hopefully be reaching the magic goal of 10.000 supports.
Back in 2016 when Gabriele and I submitted this project reaching 10k was merely a dream but now thanks to you it has come true. Our FIAT 500 will have completed its journey successfully and stuck the landing of the "10k jump". Admittedly, it's not been an easy journey and over the past two years we had our doubts if we could make it in time. All the more we want to thank each and every one of you who supported, commented and shared so we could get there in the end. We really hope you like the improvements we've made to the initial design over the course of time in the update section. We've always tried our best to keep the updates as exciting and interesting as possible.

What comes next?
As most of you undoubtedly already know our project will now move on into what's called the LEGO Ideas review. Three times a year LEGO evaluates all the projects that reached 10k independently and checks whether they've got what it takes to become an official set. This review process usually takes a few months. We don't want to get our hopes up but the fact that LEGO approved the Caterham Seven at least shows there would be a market for relatively large scale car models.

Before this happens though we want to thank a few people/groups personally.
Special thanks to:

Thank you for sharing this adventure with us and we hope it's been just as fun of a ride for you as it has been for us.

-The creators Gabriele and Felix 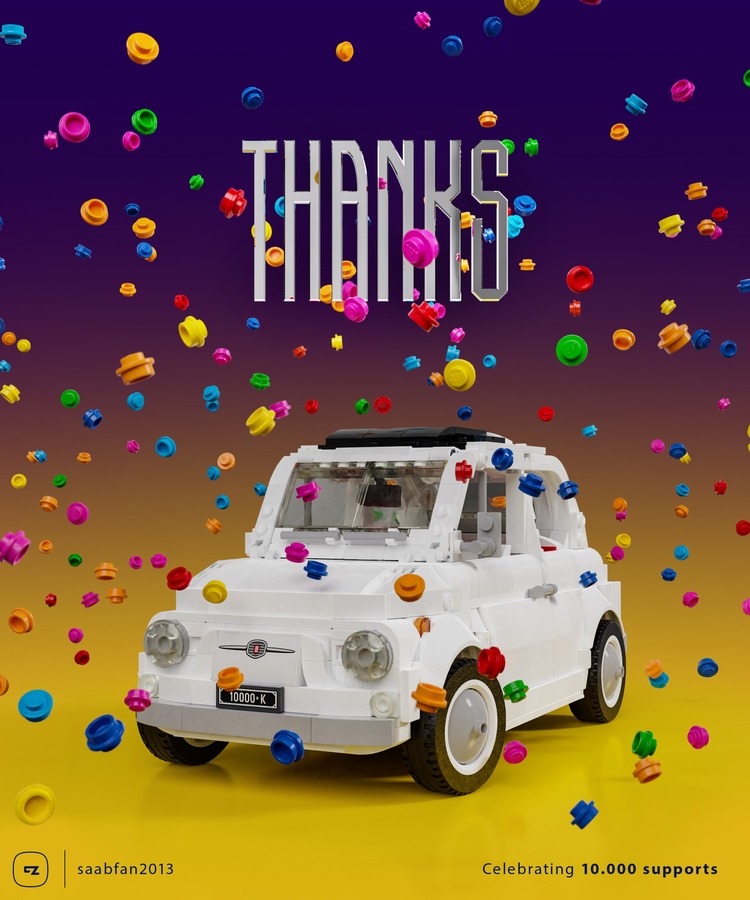 You‘ve probably heard of LEGO‘s new Aston Martin DB5 but do you know his Italian brother?

We’re happy to introduce Agent 005.
The name is Cento, Cinque Cento and similarly to his British relative he likes his Martini shaken not stirred (albeit it with a little oil in it).

We hope you like this funny update and don’t forget to support and share so we can reach 10k in time! 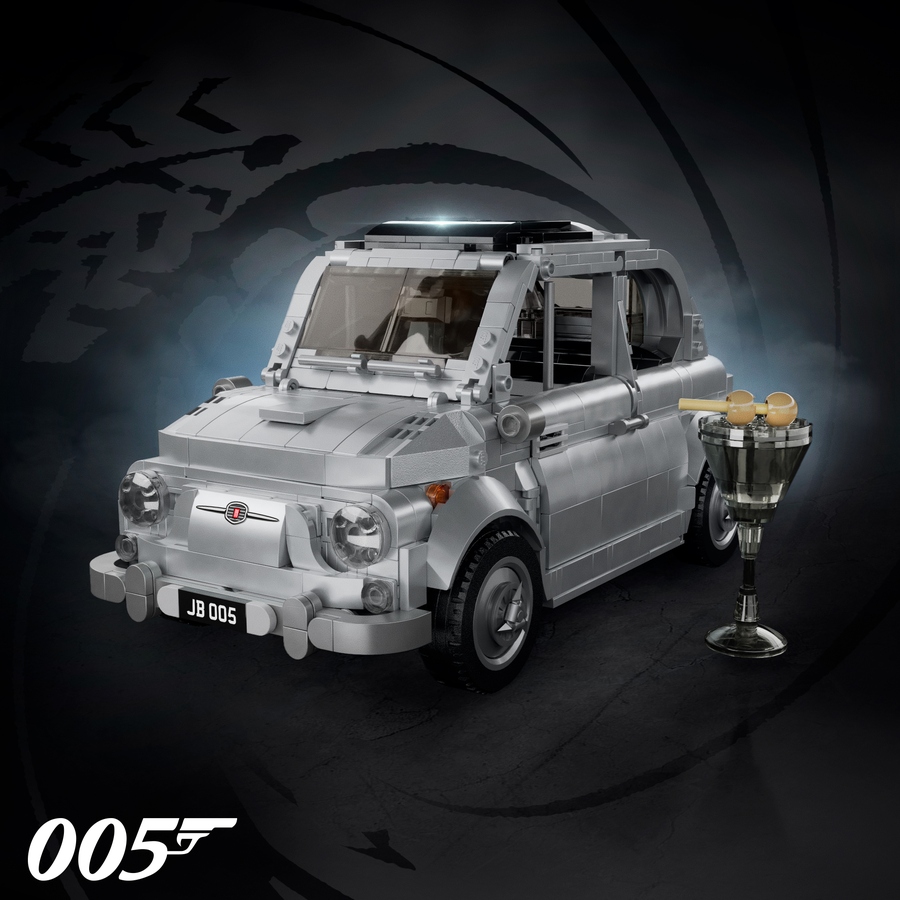 Hello and welcome to yet another update on our project. This time round we want to thank you for making it possible to reach 9000 votes. This means we're 90% done and only need 1000 additional votes to meet the magic 10k goal.

We've also been getting a fair amount of requests by our supporters and manga/anime fans who were asking for a yellow version of our FIAT as seen in the popular series Lupin III. Therefore Gabriele put together the following images showing the various decals and gadgets as well as the two main characters Lupin and Jigen. We hope you enjoy it and make sure to share it with your fellow manga/anime enthusiasts! 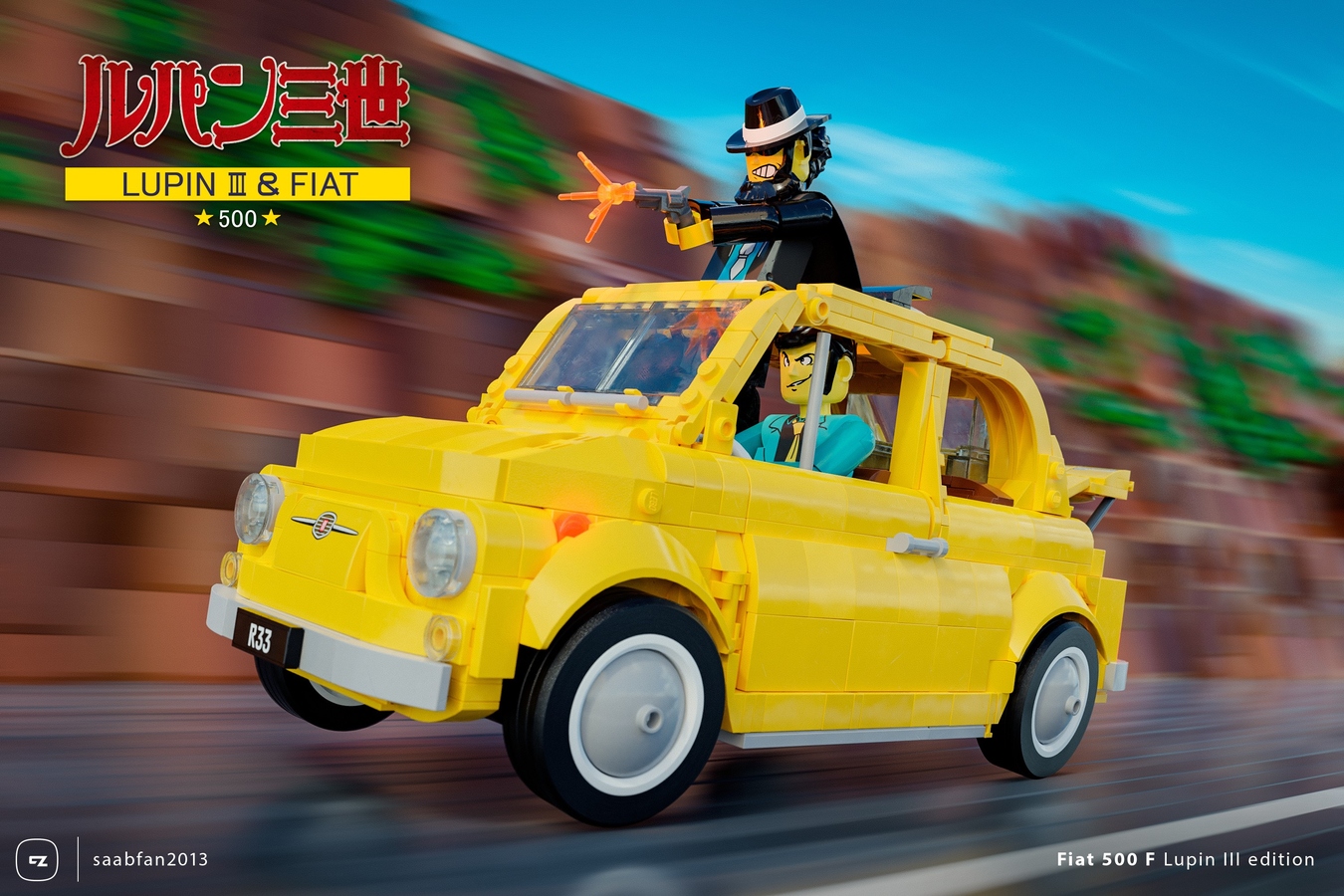 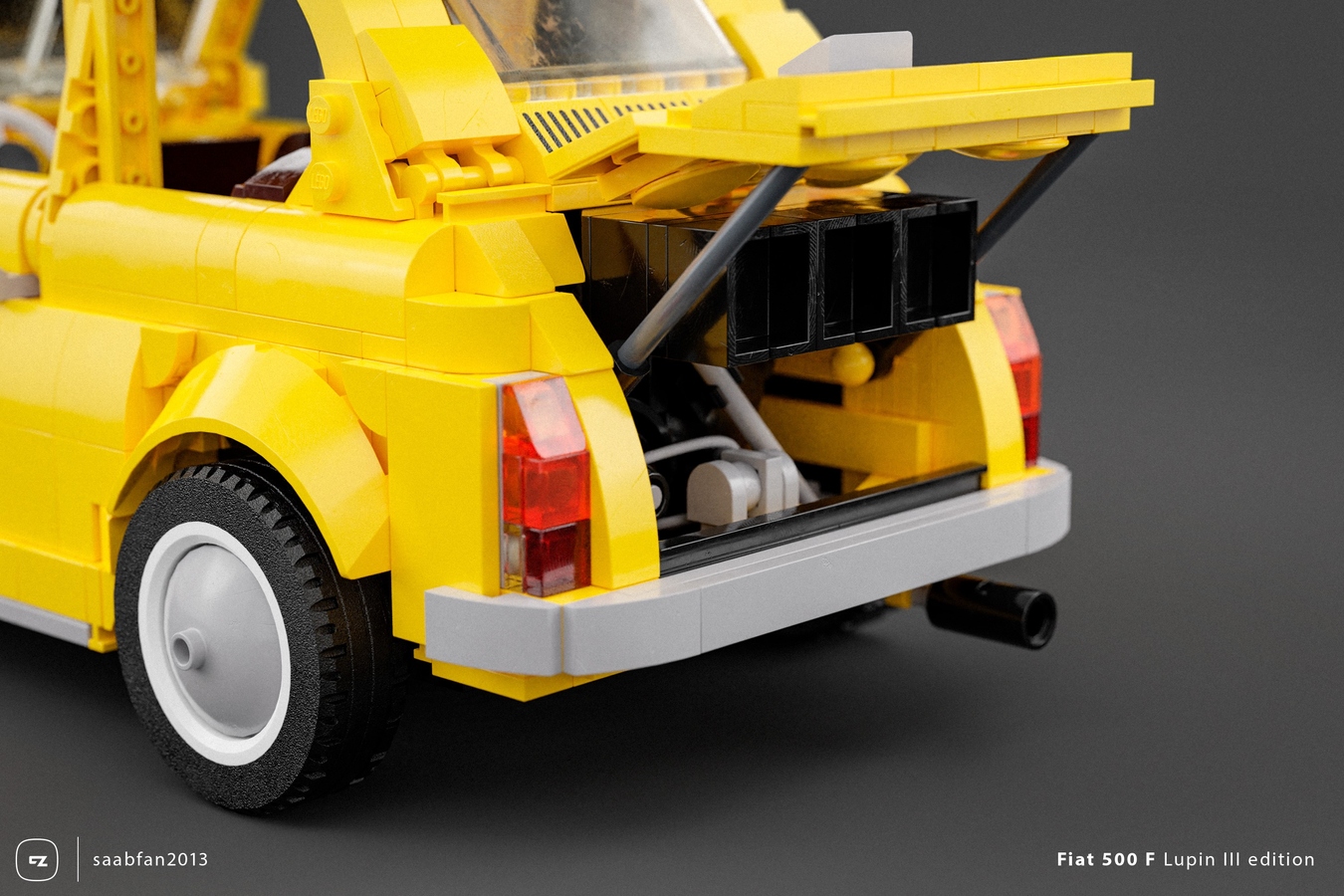 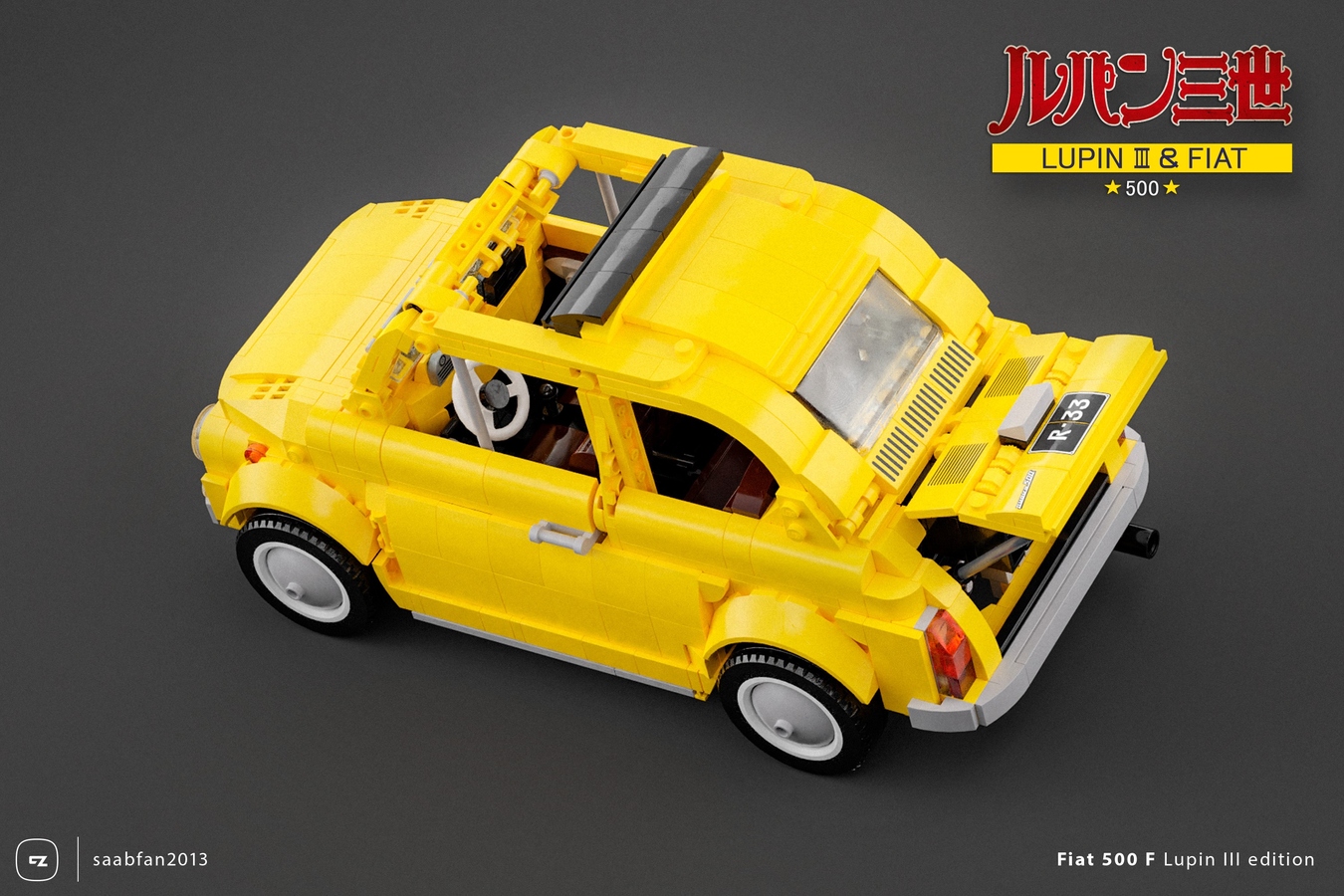 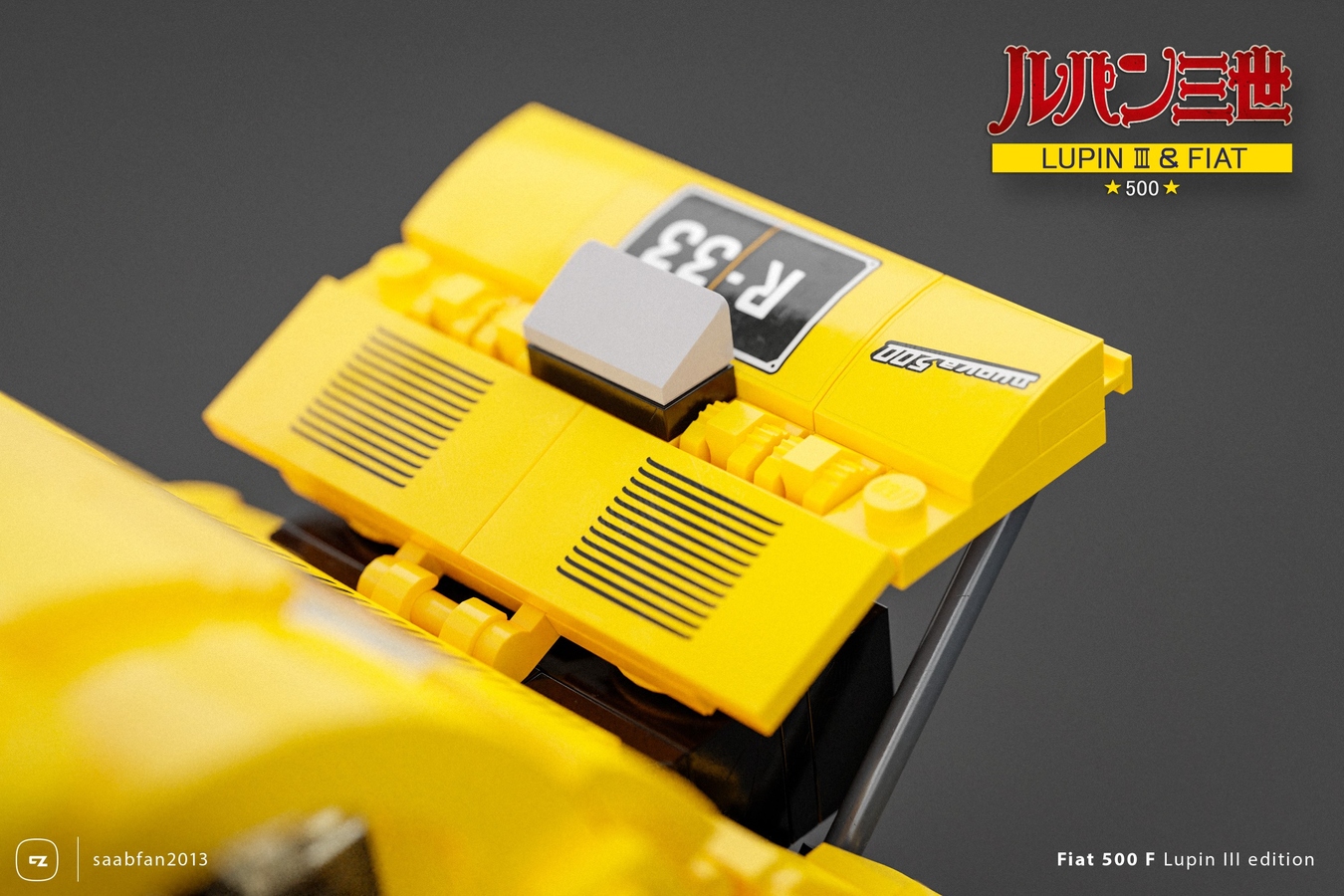 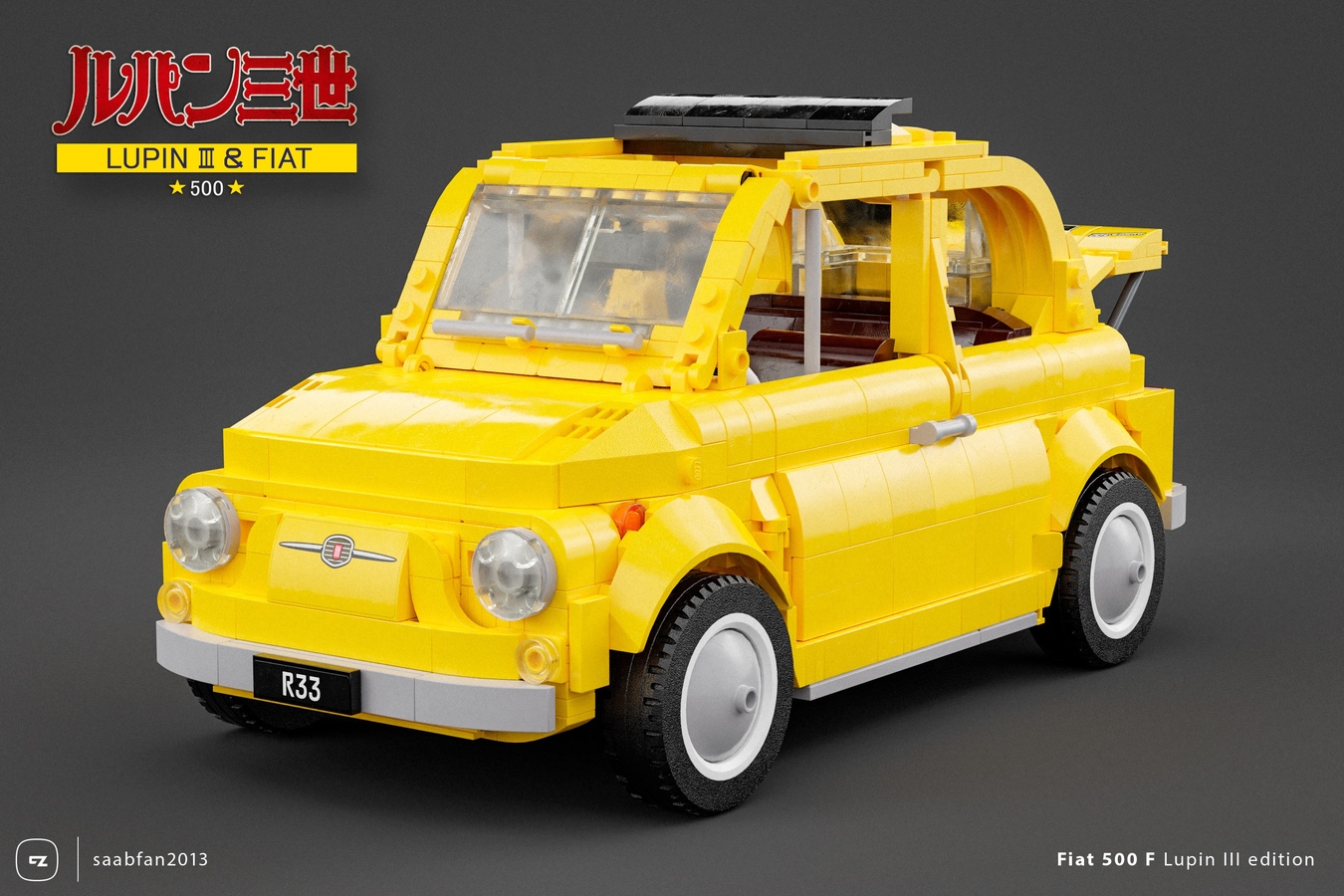 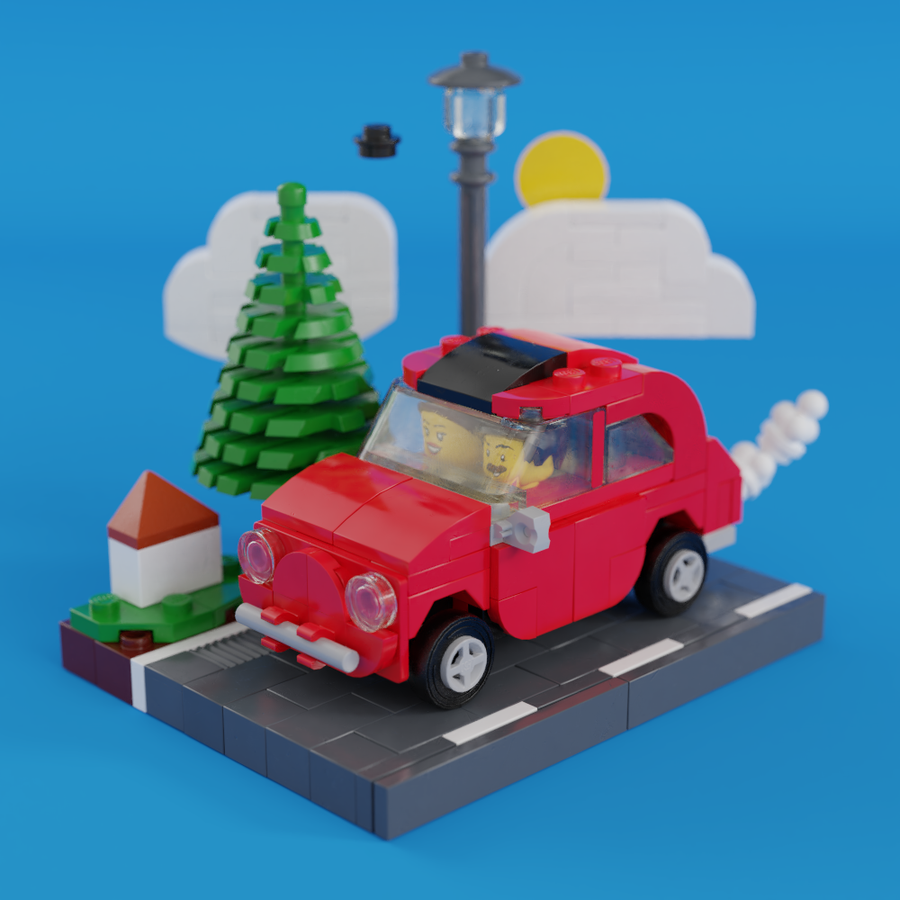 Sit back and enjoy the beautiful animation Gabriele has put together:

To celebrate reaching 10k Gabriele has put together this great animation showing the journey of our project up until now represented by a stunt performed by the one and only Stig!

Will he make the jump? It’s up to you. Make sure to support if you haven’t already and feel free to share this video with other LEGO fans on social media.

Thank you for your continued interest, support, feedback and help.

We are happy to announce our project has just surpassed 7.5k which means we have already met 3 quarters of the goal. Gabriele and I have been modifying our real model of the FIAT over the past few months and on this occasion we decided to publish some nice pictures.

Nevertheless, we still need to get 2.5k votes by October so please help us and share the project with every LEGO and car enthusiast who might be interested in our model. Every little help is greatly appreciated.

Thank you to everyone who has already supported and we hope you enjoy the new images. Make sure to click the individual pictures to view them in full resolution or directly head over to Gabriele's flickr page. 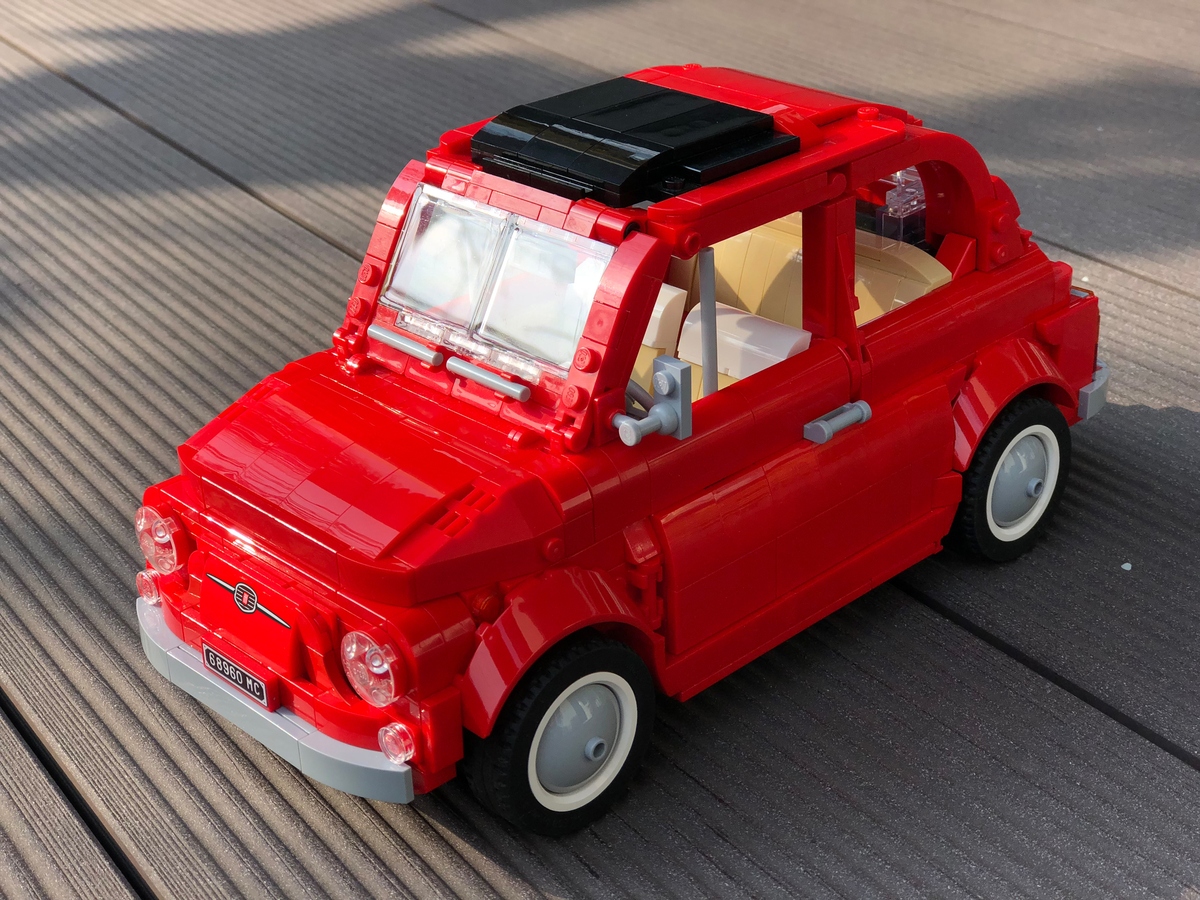 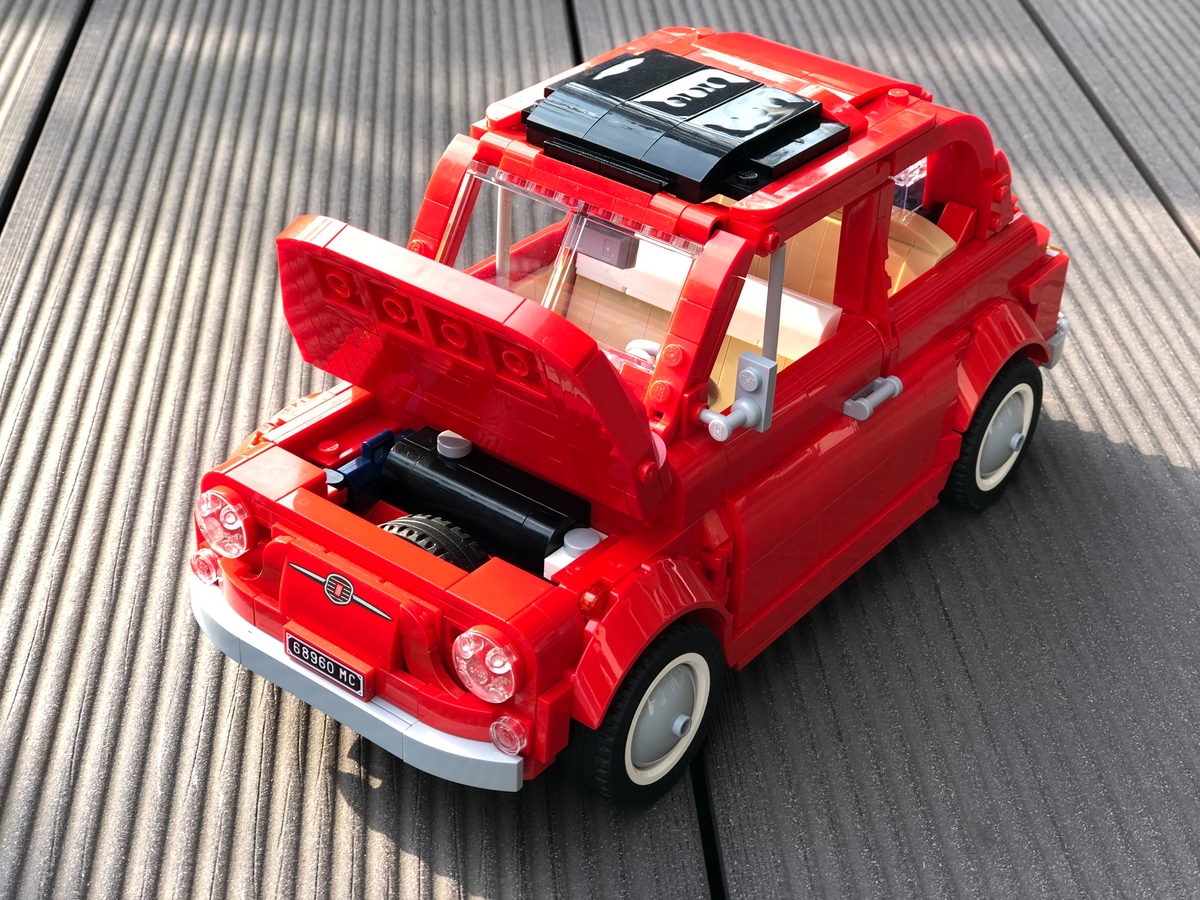 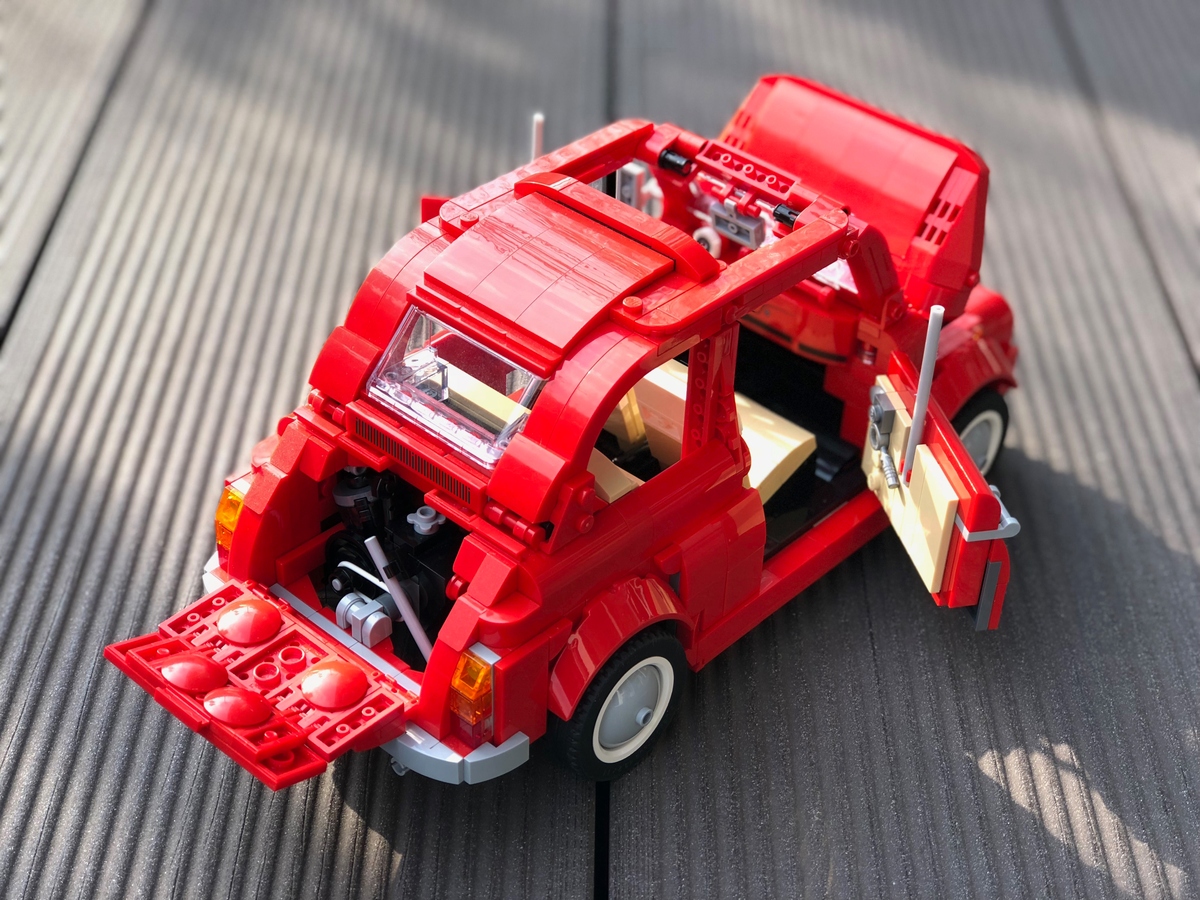 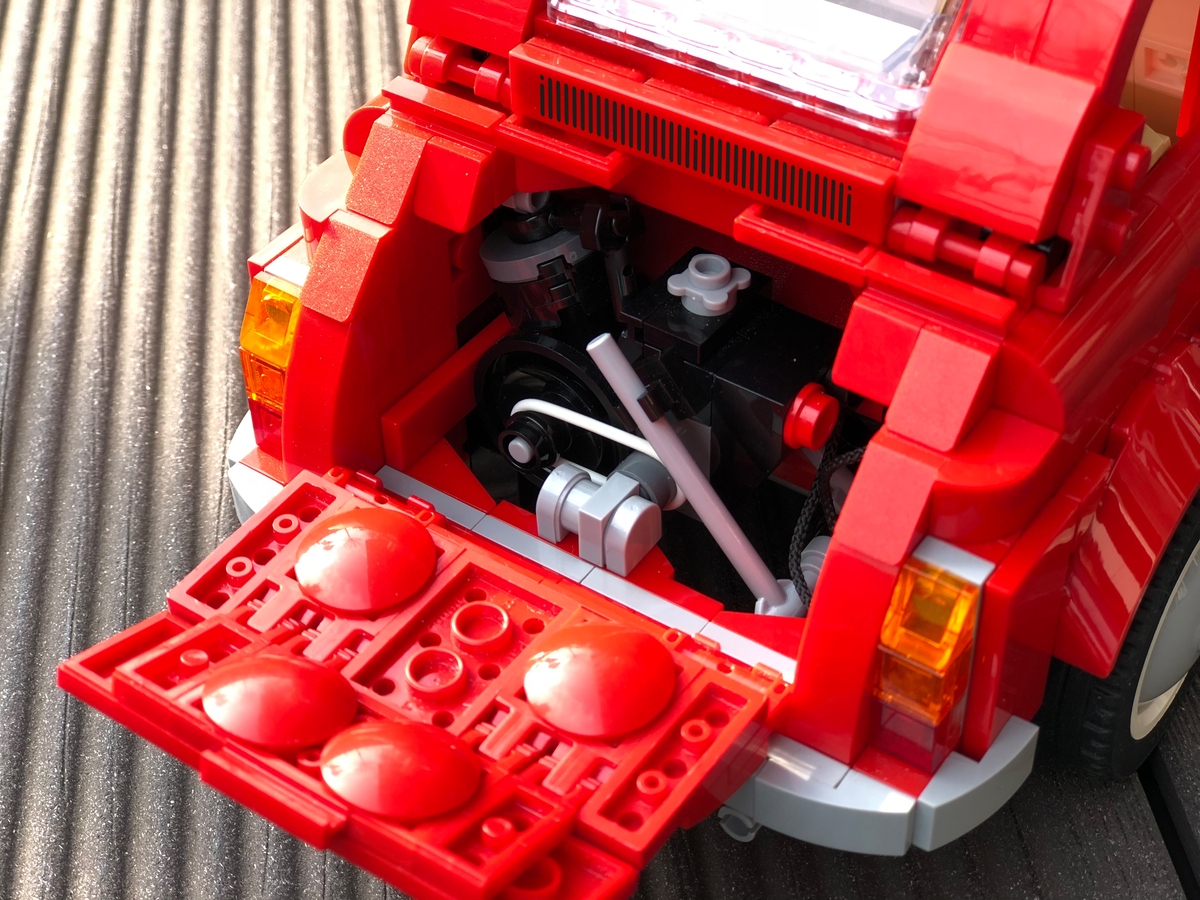 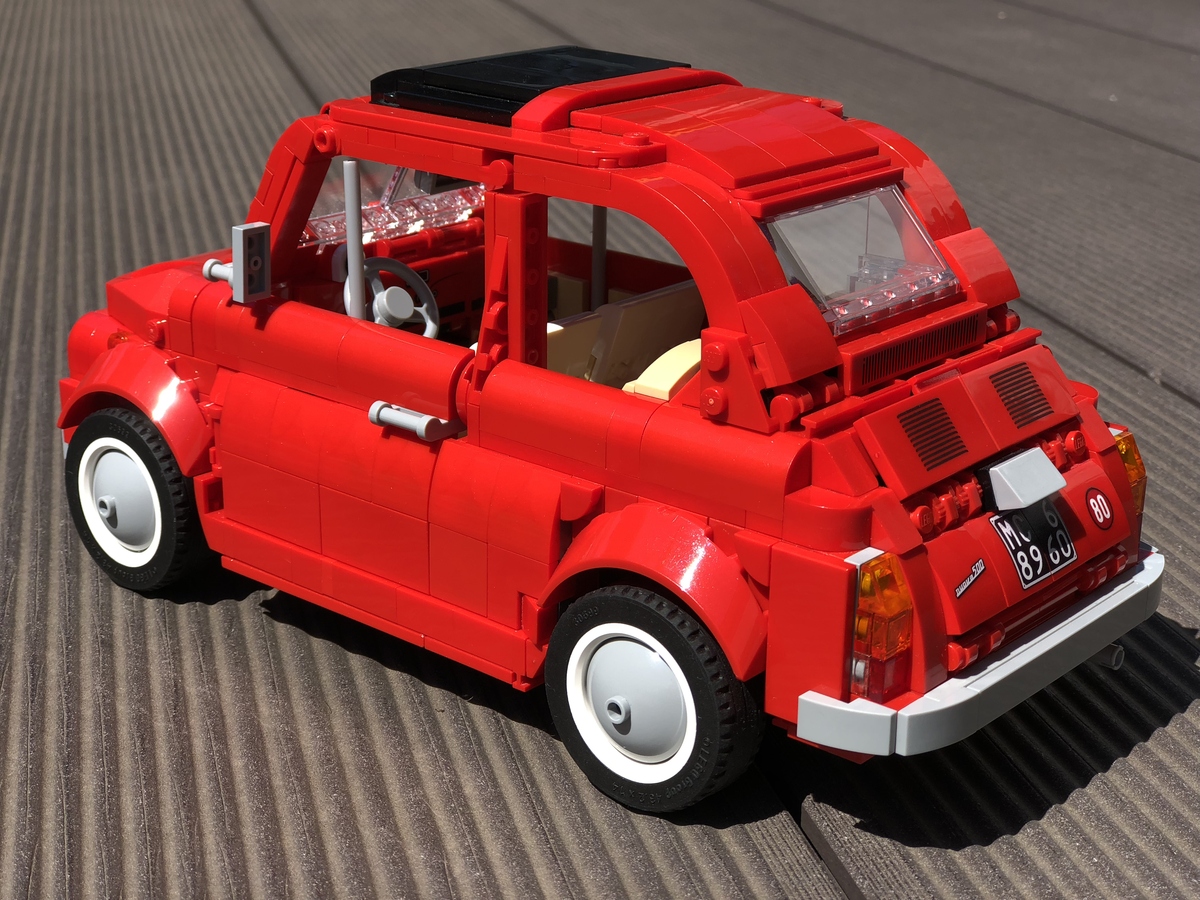 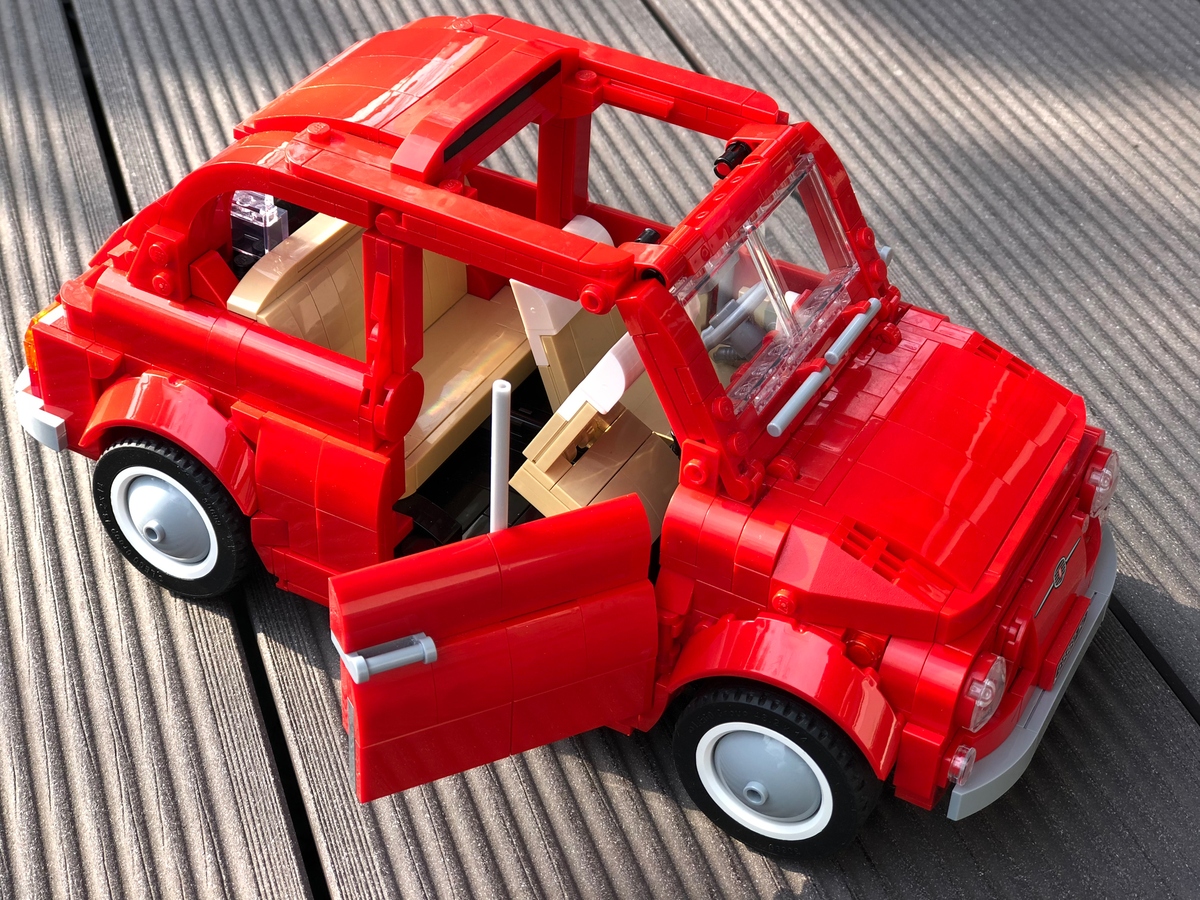 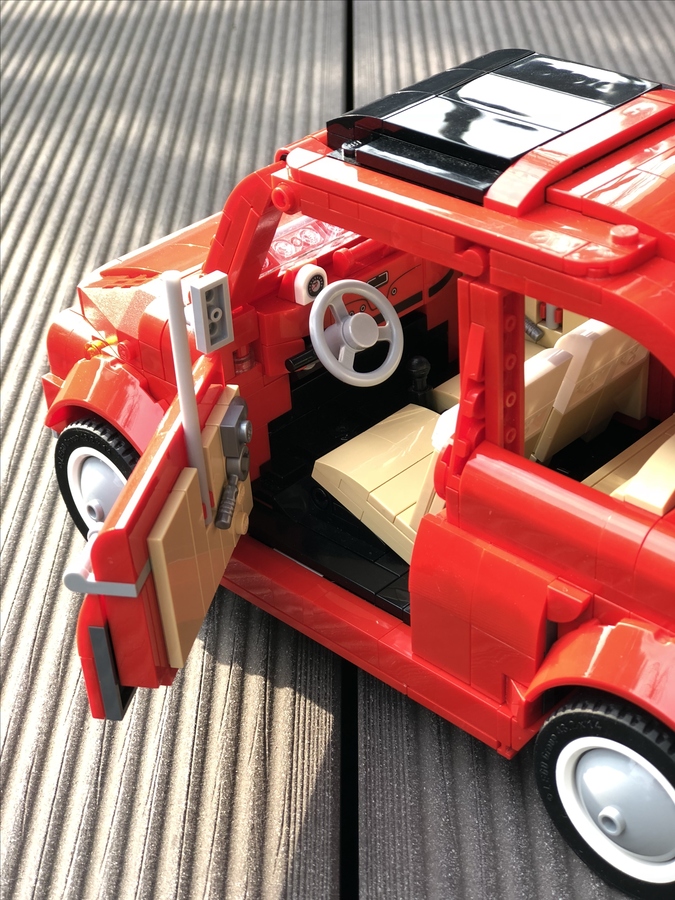 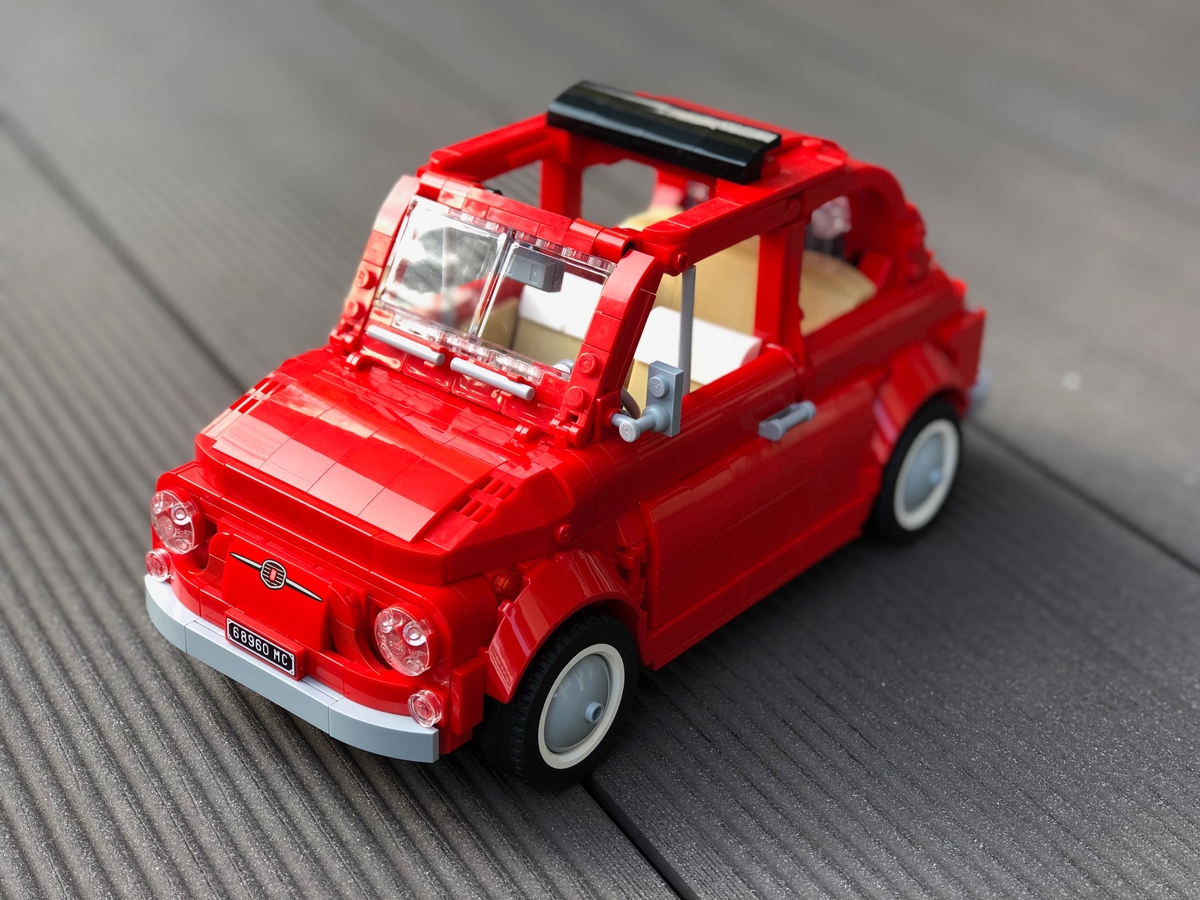 In a collaboration we teamed up with LEGO Ideas user ZetoVince37 to create an image showing his superb Vespa and our FIAT 500 side by side. Make sure to support Zeto's project here.

This beautiful image created by Gabriele shows both Italian icons in an environment completely built out of LEGO bricks. As you can see the front section of the FIAT has been redesigned removing most of the hard edges and introducing bows and curves instead. We hope to be able to build this with real bricks soon and we will make sure to provide further images.

(Make sure to view the picture in full resolution on flickr.) 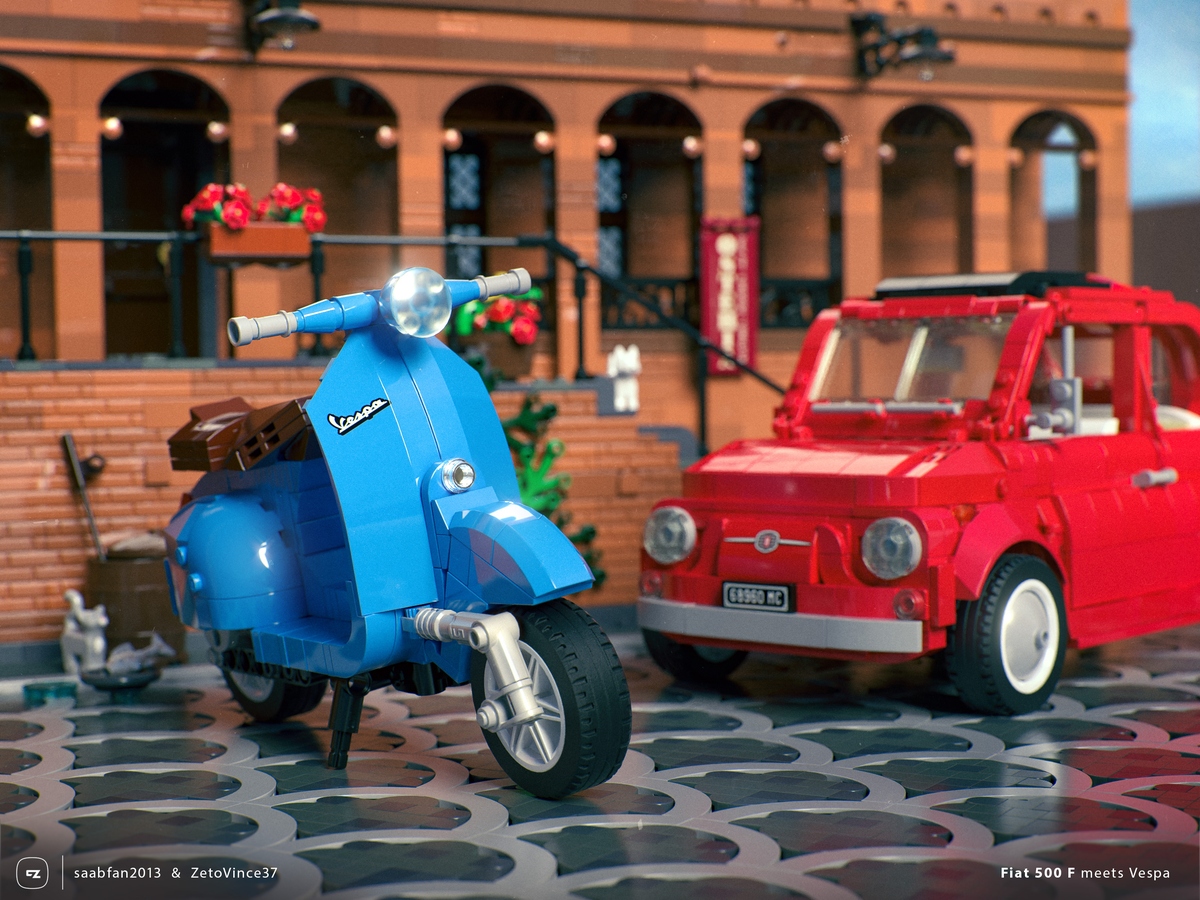 Thank you for checking out our latest update and feel free to share this image on your favourite LEGO fan-site!

Thank you for checking out our first update of 2018. Hopefully you have all had great holidays and a nice start into the new year.

Our model was featured in the Italian FIAT 500 magazine "4PiccoleRuote". We'd like to thank the publishers and all the readers who who will check out our project. Let us hope this will attract new supporters. Personal thanks to Gabriele for writing the great article and providing the beautiful pictures.

Both Gabriele and I have been busy over the past few weeks but we hope to be able to post more updates soon! 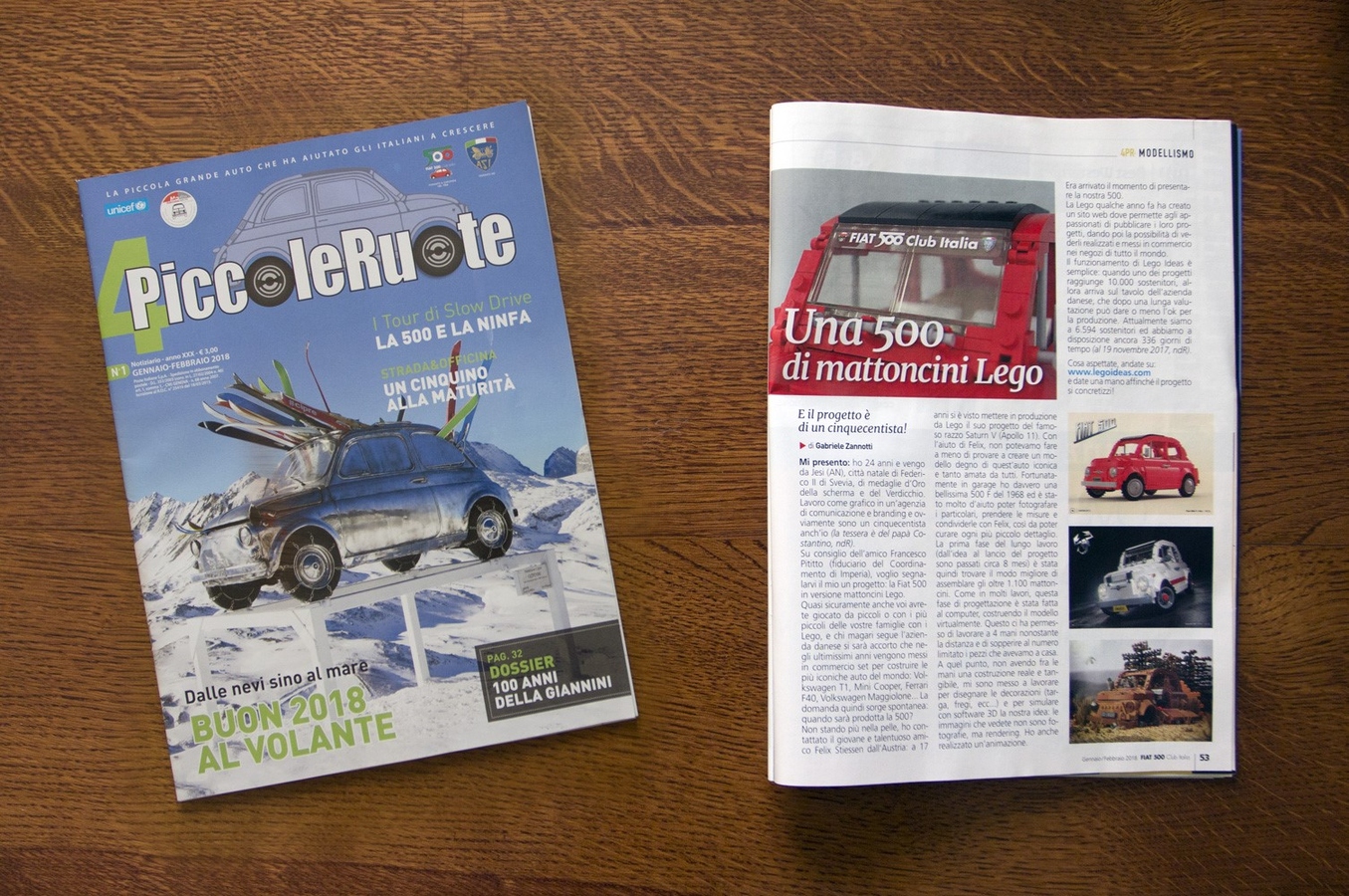 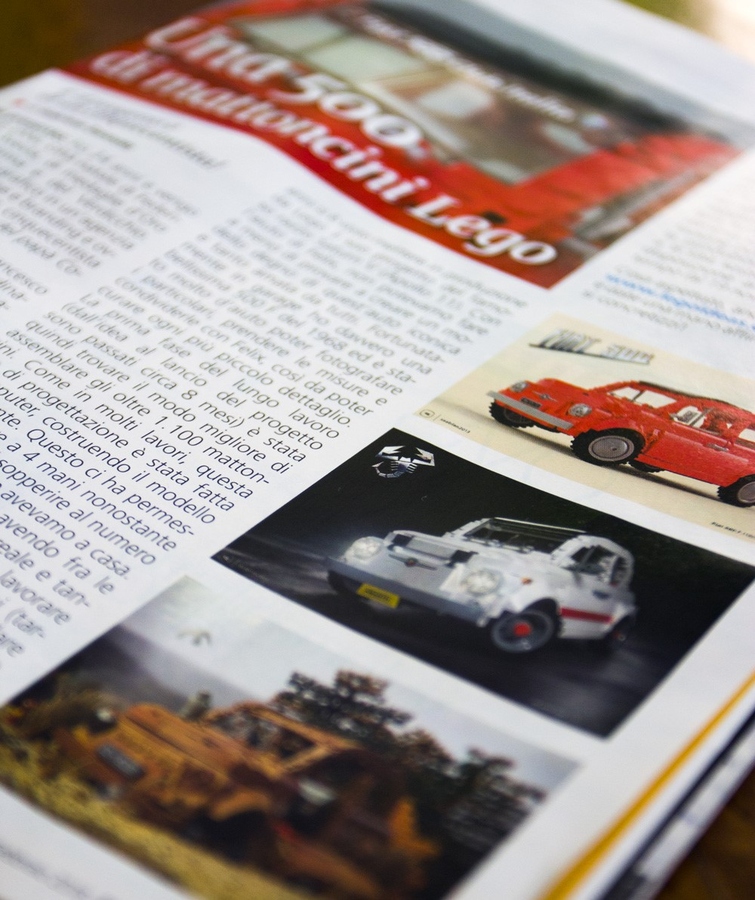 A Piece of Modern Art

The Museum of Modern Art in New York has just acquired an original-condition 1968 FIAT 500 F which also happens to be the version we depicted in our LEGO Ideas project.

On this occasion Gabriele made this great image showing the car as it is now displayed in New York together with the logo of the Museum of Modern Art in the background. (Please note that the car colour shown is not an official colour by LEGO) The eagle-eyed among you might also notice changes to the front of the car and the new slick tyres. We will make sure to show you all the details in a future update.

For now enjoy the image and make sure to read why the museum chose to acquire the Italian legend:

"The most popular version of the 500—which was in production from 1965 through 1972—the Berlina exemplifies a clear expression of form following function, a logical and economical use of materials, and a belief that quality design should be accessible to all." (read the full official article here.) 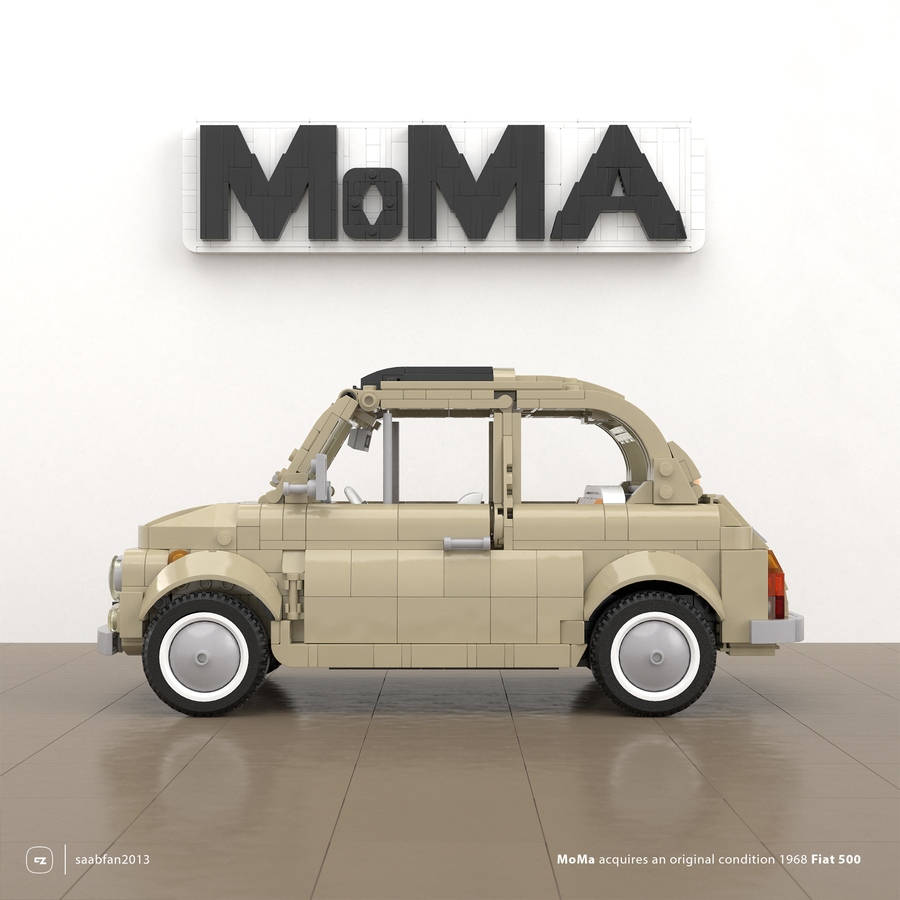 On the occasion of the 60th birthday of the FIAT 500 the mint of Italy has created a special 5 Euro coin dedicated to the iconic Italian car. 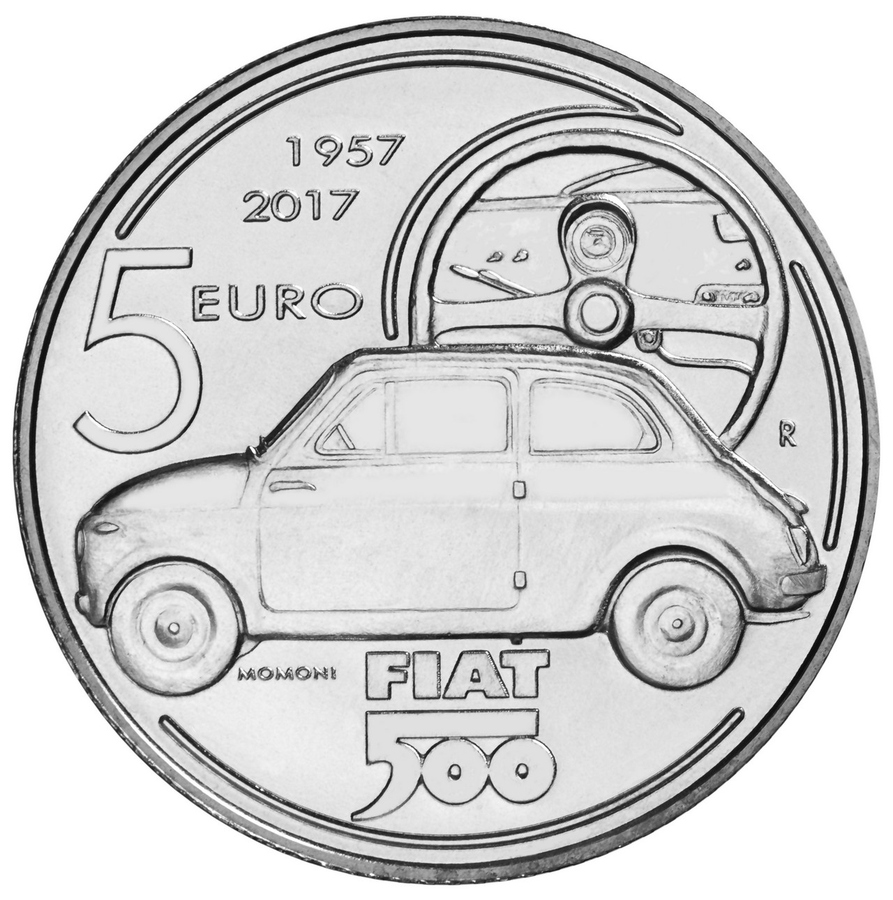 Gabriele has created this beautiful image showing our LEGO Cinquecento on the coin. 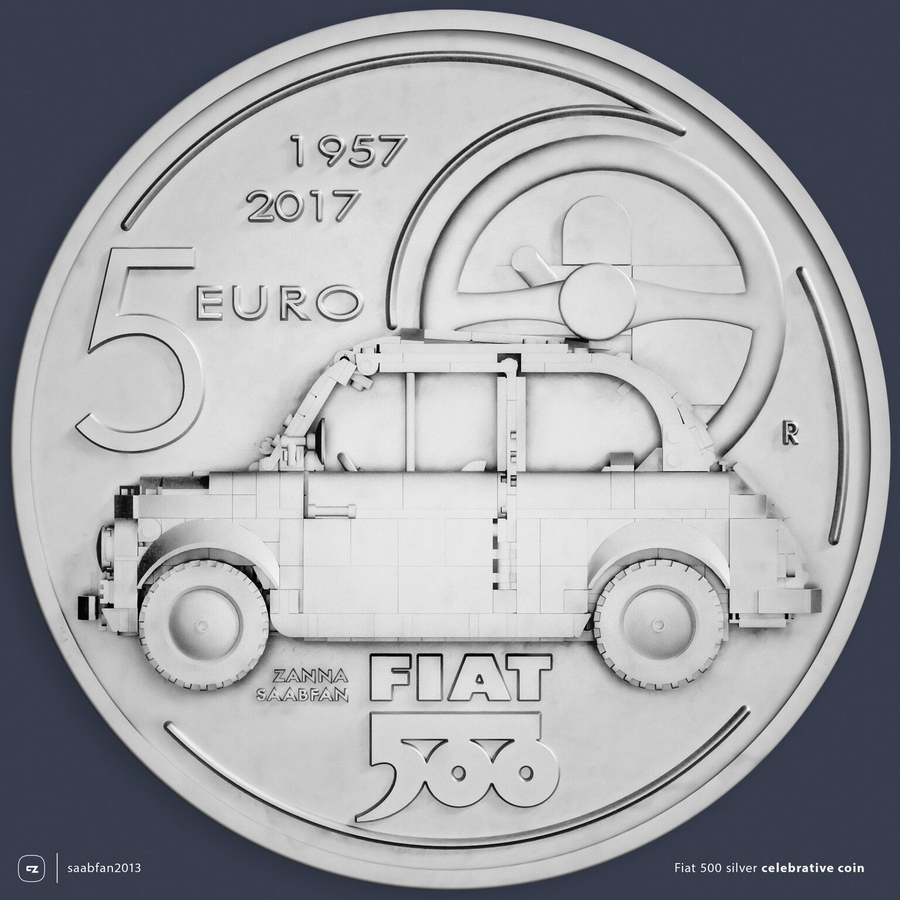 Thanks for reading and stay tuned for further updates!