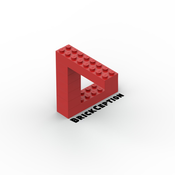 By Brick_Ception
34 comments
This build is a diorama based on the famous virtual reality game: Beat Saber. The diorama pictures the player as they try to beat a track by slicing the iconic red and blue cubes on rhythm, while trying to evade the walls as well. The player minifigure is captured in the moment of cutting a red cube. This build also brings the general atmosphere of the game which is dominated by the futuristic geometrical shapes and the shades of blue.
I built this set because of two main reasons. The first one being, that I love Beat Saber and I also love LEGO, so it really was only a question of time for the idea to pop into my head. The second reason is, that currently there are no purchasable LEGO sets based on VR games and it would be really cool if there was at least one. Also, if we have to choose one game to represent VR in the world of LEGO bricks, there is probably no more iconic and well-known VR game than Beat Saber. It's also a really cool-looking game and uses a lot of cubic shapes, which are almost begging to be made out of LEGO bricks.
Moreover, VR is becoming more and more widespread around the world and I believe that the following years will be the true dawn of VR gaming. A lot of new people with a bunch of LEGO fans among them will play Beat Saber, just like I did. These players, we, when we put down our VR headsets would happily build a diorama like this, which could represent our love for the game and LEGO at the same time, making a cool and beloved display on our desks.