Time, Weight, & Dimensions - Quantities around Us 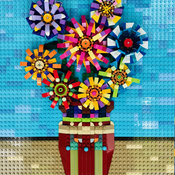 This Creation is about the measurement of quantities around us in our daily lives. They are time, weight, and dimensions. The main objective is that the LEGO-version instruments have full functionality and playability. The outcome are three instruments: Equatorial Sundial, Pendulum Weight Scale, and Vernier Caliper.

The principle of the sundial is the motion a shadow due to earth rotation. Presented in this creation is called the equatorial sundial with one feature that the sundial could be deployed anywhere around the world by merely adjusting its elevation angle according to its latitude, and then turning the instrument to make the gnomon (the pole) pointing to the north pole (south pole) if it is above (below) the equator. It has the mini dial showing the current elevation angle, and a mini compass showing the celestial poles for ease of operation. The sun casts the shadow of the gnomon over the dialplate, showing time of day. The actual deployment was shown in one photo, taken at 9:20 AM, and the shadow of the gnomon just passed IX (9 o’ clock) on the dial. It is fun to see the shadow of the gnomon moves along the dialplate as time passes by.

The next instrument that I have built was the pendulum weight scale, which was invented just a few hundred years ago. It is one type of balance weight scales. Unlike the others, the pendulum weight scale can show the measured weight without any adjustment or intervention to the device. The weight of the object to be measured corresponds to the angular position of the counterbalance. The instrument was built so that it could approximately measure the weight up to 30 grams. Different weight ranges could be realized by altering the weight of the counterbalance.