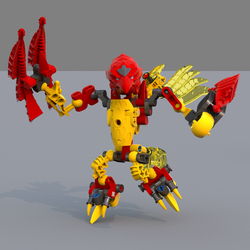 A long time ago, the world was in completly chaos. The evil forces from another dimension invaded the Earth, and destroyed everything in their way. But one day, a hero came to save the planet. Solun, the golden titan, used the power of the sun to eliminate the evil an purify the Earth.

The legend says that one day the evil and the chaos would return, and Solun would come back again to defeat them.

It was the story of Solun, my new project.

He is a strong warrior who figths by the side of the justice. He uses the power of the sun, so his armor and weapons are made of golden and silver pieces. He got the sun-sword in his right hand, and a ball shooter in the left. Also he got an extra weapon in his back.

Solun must stay the most close as possible from the sun to fight. So, his armor is desinged to fly. He has two big wings in the back, and small wings in the rest of his body too.