The Hunt For the White Whale 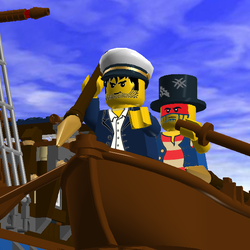 The Hunt for the White Whale is a Lego re-creation on a Book Classic, Moby Dick. The Legend tells of a monstrous whale that attacked sailors in the open ocean. A famous whale hunter, known as Captain Ahab obsessed over capturing this whale. With his crew in tow, Ahab and his ship the Pequod take on the legend of the sea. This set is focused on the confrontation between the White Whale and Captain Ahab.

I had an idea for a project "Lego Books," using famous classics to build Lego sets. These sets would hopefully inspire young kids to read and enjoy reading books. With active visuals, they can associate faces, ships, and places to conjure their own imagination. This in turn would increase their education, and parents would be more likely to purchase a toy that has an educational benefit.