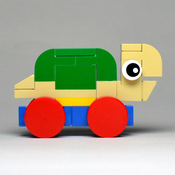 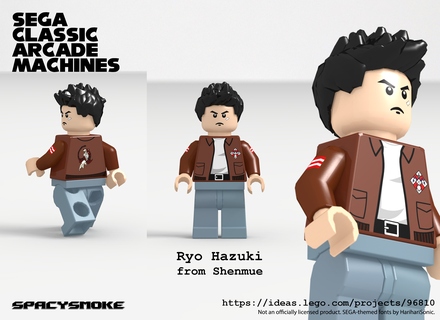 "He shall appear from a far Eastern land across the sea. A young man who has yet to know his potential..."

I am officially adding Ryo Hazuki from Shenmue I/II/III to the list of potential minifigures included with this set!

Shenmue was a landmark game from the mind of Yu Suzuki, the man responsible for classics such as Hang-On, Space Harrier, Out Run and After Burner. Set in the 1980's, the world of Shenmue features many of the classic games proposed in this project, so it is only fitting that the protagonist, Ryo Hazuki, be included!

Now, many Lego fans know that the minifigures are usually the most expensive pieces in a Lego set, so if this project passes review and Ryo is chosen as one of the minifigures, The Lego Group might decide to replace one of the other minifigures to keep the cost and price of the set down. If so, would you rather get the male or female Sega fan minifigure? Of course, this is not set in stone, but I don't want people to think that all four minifigures would be guaranteed.

Last but not least...ONLY ABOUT 550 MORE SUPPORTERS TO GO!!!! It's coming down to the wire, but I'm confident we'll get this thing to 10,000 thanks to all of you awesome supporters who are spreading the word about the project! THANK YOU!

P.S. Hi-res version of the image above available on flickr: https://flic.kr/p/RHTts6

I was planning something else for my next update, but it's not ready yet. I wanted to post something for the 9k milestone though so here's an idea I've kicking around that I probably should have made a long time ago to help promote the project: 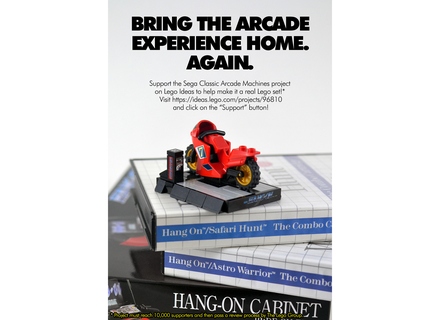 It's basically a sort of print ad/flyer design to promote the project. See a high quality version on my flickr page here: https://flic.kr/p/R9KVjk 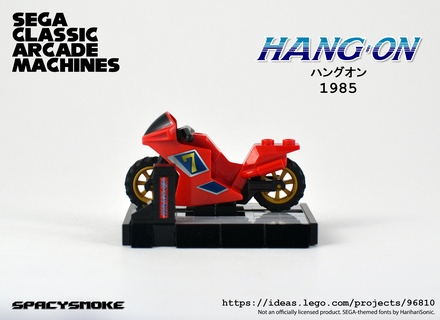 New Hang-On build and new photos! I updated the base to be smoother and more durable. I also tried seeing what it would look like with stickers/printed parts. Unfortunately, this motorcycle piece doesn't have much room to add stickers to. 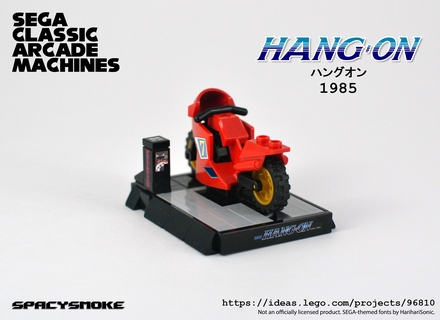 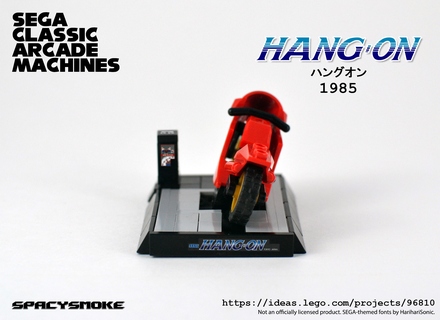 Of course, the bike can tilt to the left and right, just like the real thing. 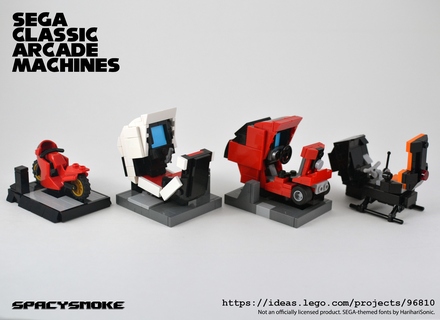 Updated lineup photo. Sorry, I didn't have time to update the stickers for the new Out Run build seen here, so I decided to leave all of them unstickered.

Thank you to the following people/sites for mentioning the project! We've seen some nice increases in supporters thanks to you!

That's all for now. I'll leave one last image of something I'm working on for the next update. Feel free to guess what it is in the comments! 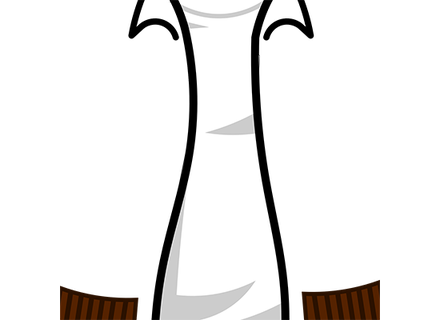 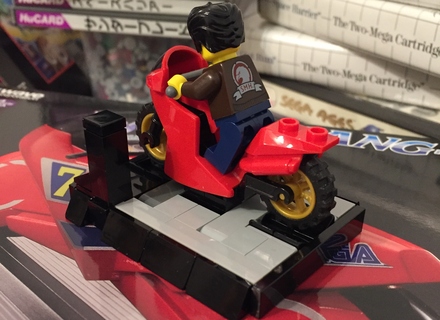 Work in progress build of Hang-On! Got tired of trying to build the motorcycle out of bricks, so am using this one. Doesn't look too bad, but there's no room for a screen! Bike tilts left and right, just like the arcade machine!

Will try to take better photos later, along with another updated build of Out Run. Also starting to build After Burner II in my head.

Check out my interview with Team Yu, the fan campaign project that helped raise support for Shenmue III and is now campaigning for Sega to re-release Shenmue I and II in HD! Check it out here and while you're there, check out their website!  https://teamyu.net/Shenmue.III/topic,418.msg2870.html#msg2870

A new update with an actual new build? Yes, it's true! Something new...ish! I've made some changes to the Out Run cabinet! 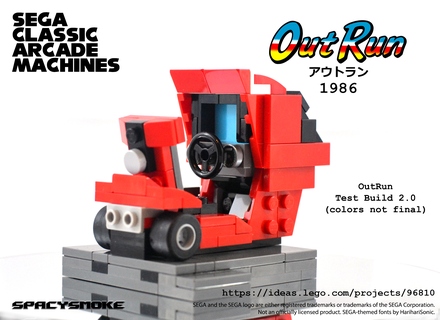 There were some things that really bothered me about the original build, and when something bothers me, I can't let it go until it's corrected.

Here's what I wanted to accomplish:

So I started with redesigning the screen area, because I felt it was important to use a tile for the screen which would allow it to be swapped out with different screenshots a lot easier (you could have different screenshots printed on different tiles). I also used the build technique I used on my Space Harrier cabinet to get rid of the gap below the marquee. This all changed the internal structure quite a bit and I basically had to redesign it almost completely.

It was all for the better though; I think you'd have a fun time putting this together because it is built in all directions! Yes, there's quite a bit of upside-down building here to get everything to fit in such a small space. So if you like intricate builds, you'll love this!

The redesign also allowed more space, which let me add some internal detail. So now you can open up the back of the cab and see the pcb and other components. 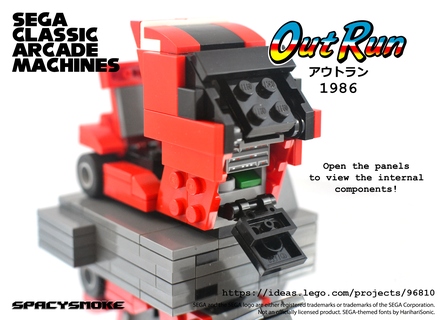 I was even able to make the screen look kind of like a CRT! See this cross section to view the build and details (some parts removed to show detail): 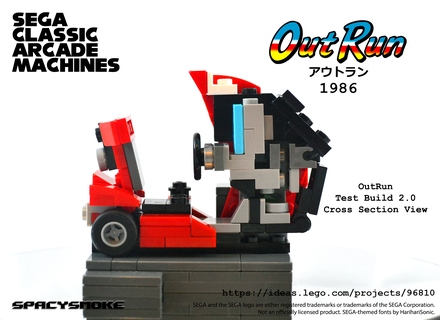 I still want to redesign the base because I think it should be narrower, so maybe that will be the next update.

Big thanks to Brickset staffer, FlagsNZ, for showcasing this project for the second time on Brickset! No doubt a chunk of the new supporters came from Brickset because of this article. If you're into Lego, or are just getting into Lego, Brickset should be your number one stop on the web for Lego news. They've got some fantastic reviews and articles, plus you can track your collection there!

Thanks for making a video about the project! much appreciated!

That's it for now! Thank you for supporting and continue to spread the word about the project! We're almost there!

Staff Pick of the Day!

The project was chosen as the Staff Pick of the day today! To the Lego Ideas staff: thanks and keep up the great work on the site!

Sorry for the lack of updates on this project. I really do want to continue making actual updates, but other responsibilities have been keeping me from my hobbies. In my last update, I told you about how I had to move a couple of times. Well, the moving is finally done, but my second daughter was also born not too long ago! If you have kids, then you know what a handfull one child can be, let alone two children.

Unfortunately, my Lego is still all over the place in various boxes, but I did manage to pull out the original models for this project and snap a photo with the new Lego Dimensions Sonic the Hedgehog figure for a bit of fun (sorry for the lousy iPhone photo).You can also see how the models look without the stickers (the stickers were added digitally). 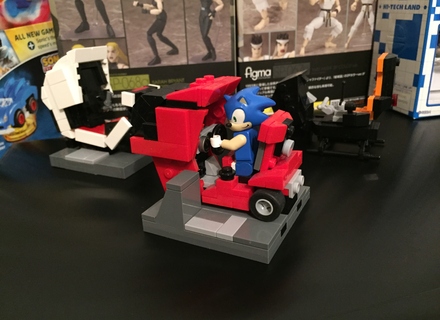 Anyway, HUGE thank you to all of you Sega/Lego/videogame fans that supported this project so far! Please continue to share the project with anyone or any site that you think might be interested in it! Let's get to 10,000!!!

Today, the project reached the 5,000 supporter milestone and the time left to reach 10,000 has been extended by another 6 months!

Thank you to all the supporters out there! Remember to keep sharing the project on social media and Sega related forums!

Have I worked on any new cabinets? Sadly, I haven't been able to work on much of anything Lego; I recently moved so all of my stuff is still packed, AND I'm probably going to move again within the next year. The next place should be permanent so I'll finally be able to unpack everything and get back to building.

Thanks again everyone, and let's aim for 10,000 supporters!! 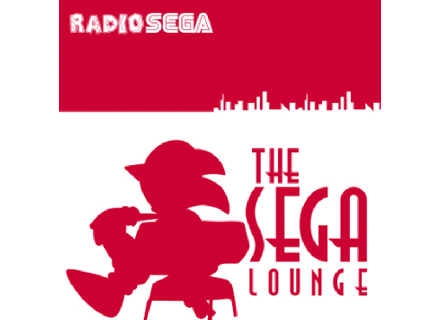 I had a great time talking SEGA with one of the show's hosts, KC. HUGE thanks to RadioSEGA for having me on the show and helping getting the word out about this project! If you love SEGA games, please check out RadioSEGA and listen to some great SEGA music 24/7!

Good job, everyone! The project has reached 1,000 supporters today! We're 10% there to the needed 10,000 with plenty of time left to reach that goal.

Big thanks to all of you who supported and to Kotaku.com for publishing their story about the project which was the main catalyst for the attention the project received and continues to receive.

I'd also like to take this time to talk about what to expect. Those of you not familiar with the other Lego Ideas sets will want to read this:

The only exception so far has been the Minecraft Lego set. It apparently was so popular/profitable that Lego decided to develop an entire Minecraft lineup. So please keep these points in mind, especially if you are going to support the project.

So far, the response to the project has been great and I'd like to thank everyone who supported the project -- THANK YOU!!

This project will not go anywhere without the support from awesome Sega fans like YOU!

Also, big thanks to the following sites for posting about the project:

You can also view high quality versions of the images on my flickr photostream, which also has some extra info regarding each build. https://www.flickr.com/photos/swafr/sets/72157648832596244

Additional FAQ based on the response so far: