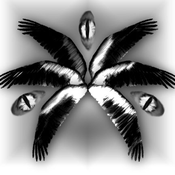 By Tenebrae
1 comment
Hello! I am here to announce my suggestion for a new "LEGO Architecture" set: the Pyramid of Giza. This is the oldest of the Seven Wonders of the Ancient World, yet is the only one still standing today. The construction was extremely accurate, forming an almost-perfectly symmetrical pyramid. The Great Pyramid of Giza, also known as the Pyramid of Khufu or the Pyramid of Cheops, was originally covered by stone that gave the slopes a smooth appearance. However, this has largely disappeared, leaving the pyramid shorter and rougher.

A view from the front. I realize that I'm not the only one to post such a project, so to make mine stand out, I designed my model to make it look like it is in a state of deterioration. It is in between its sleek, original state and its rugged, modern one. I figured that it would give it an original appearance and make the build less repetitive. The structure directly in front of the pyramid is a funerary temple for Khufu, and the three smaller pyramids are for his wives. The cone is meant to represent an even smaller pyramid, the purpose of which I do not know.

From this position, you can see the "robber's tunnel", which is the modern entrance to the Great Pyramid of Giza. As suggested by the name, it was not part of the original design. The curved shapes are meant to represent dunes.

Here, you can see the rectangular structures known as "mastabas", which are where nobles were buried. The indentations you see are "boat pits", where boats were once placed, presumably for the pharoah in the afterlife. If you want to have one of the Seven Wonders of the Ancient World as a LEGO set, please hit that support button!