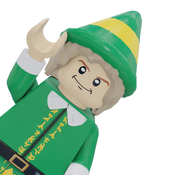 Welcome to the Clash Royale Lego Ideas project!  Glad you could make it!  First, I'll explain the highly popular mobile game that this project is based off of (Clash Royale, of course!)

If you haven't heard of Clash Royale by now, you should really go check it out.  Clash Royale is a popular mobile game where you can duel players in real time with troops, buildings, and other things that you unlock.  The goal is to knock down more crown towers than your opponent.  There are three crown towers on each side, and it is your mission to get troops to the other side to take out each one.

What I propose is a Lego version of the Clash Royale arena!  It would have all the crown towers, modular arena decorations (I'll get to that in a bit), and, most importantly, a play feature to "drop troops" into the arena!

Let's go through the pictures.

The first picture shows the set in its entirety!  Arena 1 from Clash Royale, the Goblin Stadium!  The decorations are extremely accurate to the game!

The second picture shows the modular aspects of the set.  The entire arena is actually only attached with six 2x2 plates, and can easily pop off to make room for other arenas, like in...

...The third picture, which has an alternate build for the arena!  This time it is arena 8, Frozen Peak!  The crown towers also come off easily, so the only thing you are replacing is the actual terrain.  The crown towers and the bottom do not change.

The fourth picture shows the area where the "dropping troops" feature of the set is.  The two "lifts" on either side can go to each crown tower on the right or left, or come together in the middle to go to the large crown tower (troops like the giant and the prince are only able to go through this middle tower due to their size).

A demonstration of the feature is shown in the fifth picture, where you can see the steps to using the feature!  As you can see, the main crown tower has a door that swings open to reveal the troop!

The sixth picture is a closeup of the main tower!

The seventh picture reveals my personal favorite part of the set:

The Clash Royale Arena set includes 11 minifigures, plus 2 brick-built figures and a bigfig!  They are, from left to right:

What is Lego Ideas?

Now, you may have stumbled upon this project, and while reading through this (and hopefully loving it!), you thought, what even is Lego Ideas?  And how can I help make this Clash Royale Project an official Lego set?  Well, the answer to that is simple: by supporting it!

Lego Ideas is this amazing website (which you're on now), which allows people to post ideas for Lego sets, and if the ideas, or projects, get enough support (10,000 votes, to be exact), the Lego Company will review the set, and consider making it into an official Lego set!

So in order to get a Clash Royale Lego set, we need your support!  To support, just click the big blue "Support" button at the top!  You may have to create your very own Lego ID to make an account, but that is super easy and costs nothing at all!  Stick to it, then come back here and support!  Every vote counts!

Thanks for taking the time to read all this, and thanks in advance for your support! Check the updates tab for new troops, buildings, spells, and arenas!  I'll be updating it frequently! ;)

P.S. Let me know, though!  Would you rather see more troops, buildings, and spells in the updates, more arenas, or some other improvement to the set? (Like an elixir play feature, or something of the sort.)  I want to hear from you!