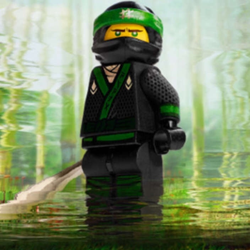 Club Penguin was founded in 2005 by 3 fathers wanting to make a safe online world for their kids to play in. In 2007, this global phenomenon was bought by Disney for millions of dollars. Ever since, Club Penguin has grown, and grown, and grown. Disney have really helped Club Penguin expand. If you want to find out more about Club Penguin's history, visit http://www.clubpenguin.wikia.com. CP has lots of merchandise, plush puffles and penguins, igloo playsets, even giant puffle beanbags! But there's one item which isn't in CP's mass collection of merchandise in their gorgeous office in Kelowna, and that's LEGO. Club Penguin will have been around for a decade as of October 24, 2015. It needs this!

I present to you the Club Penguin project, here with a model of the Town Center. Puffles are fluffy ball-shaped creatures native to the island, and four (green, brown, blue, and pink) would be included in the proposed set. Additional minifigures also included are two regular penguins, aqua and purple, DJ Cadence, Gary, Aunt Arctic, a coffee barista, and the Clothes Shop Owner.

In our previous projects, we received lots of support from the Club Penguin community on our projects... even some from the Club Penguin team! We care very much for our supporters. That is why we have special parties on Club Penguin every once in a while! We just one thing we need all of you to do in return... spread the word on Twitter, Facebook, YouTube, etc. and let your friends know! The more people that support the idea, the more chances LEGO Club Penguin could become a reality. Also, make sure to tweet Club Penguin staff members @ClubPenguin, @ClubMegg, @Ninjachat3, @Daffodaily5, and @SpikeHikeCP about the idea! And of course, click that BIG BLUE BUTTON on the sidebar and fill in the necessary information! Yup, that’s all you have to do! It’s as easy as one-two-three. Remember: the more supports the higher the chances this might become a reality! So make sure to let your friends know and support the idea. Together, we can make a LEGO Club Penguin set a reality! So get out there, support, tweet, YouTube, blog, post on fansites, do anything you can do to make the Club Penguin community proud and get us a real set! Tweet using hashtag #LEGOCP!

The 1% proceeds earned from this project will be donated to some of the organizations Club Penguin donates to during their annual Coins for Change drive, such as the Wildlife Conservation Network, Free the Children, War Child, Partners in Health, and more. Each box could include a code to unlock a Red LEGO Brick Costume item in-game as well, making it a real treat for all Club Penguin fans! I hope you find yourself generous enough to support our project! This project is dedicated to Polo Field, real name Chris Gliddon, the former Club Penguin social media manager who departed the team due to recent layoffs on April 22, 2015. He really wanted our dreams to come true, in a game where anything is possible... here's for you, Polo!

And as Billybob would say... WADDLE ON!