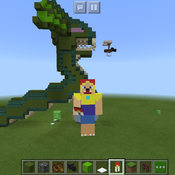 By QuietestDelightedButton
12 comments
This set will have Kai, Jay, Zane, Cole, kid Lloyd, Nya, and Garmadon along with the four golden weapons. This set also includes a tall building to recreate the scene of Garmadon jumping off a tall building with the four golden weapons to get to the weak spot of the Great Devourer, along with a lime translucent rock and lime translucent stud tiles as a slime ball to recreate the scene of the Great Devourer exploding into slime. The Great Devourer not only looks very accurate, But also the length is about 17 two by four's with one 2 by 2, enough to maybe wrap around the tall building just like in the show. the great devourer has lots of articulation thanks to the 20 ball joints on the great devourer. the size of the tall building 27 bricks tall and 2 four by two's wide. All six of the ninja's come with their own accessory such as hair piece, and an owl piece as Zane's falcon. The reason why I built this set was because I always wanted a realistic looking Great Devourer LEGO set ever since I was 7 years old, and now I finally have a chance to have my own Great Devourer in my room and because I want to help the support Ninjago community with this set.