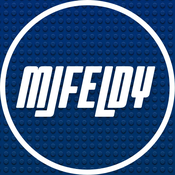 Welcome to Dunder Mifflin Paper Company's Scranton branch! The Office was one of the most popular shows when it aired from 2005 to 2013. Although the show is over, it is still one of the most well-known TV shows ever. I have watched every episode of The Office countless times and it's always a sure way to make me smile. With my love of The Office and Lego bricks, I just had to create a Lego model of Dunder Mifflin's Scranton branch. I only made the front part of the office because that is where most of the action goes on during the show.

I had lots of fun creating all of the little detals in this project. It gave me an excuse to go back and watch all of my favorite episodes again. I just made the front section of the office to reduce the size and piece count. I felt that if I would have made the entire office, it would have been an unrealistic Lego Ideas project. I put a lot of time, effort, and detail into this project and I hope you all enjoy! "Bears eat beets," "FALSE! Bears, beets, Battlestar Galactica"